The Heritage Foundation locked on to the locations of at least 30,000 cell phones at non-government (NGO) migrant aid shelters and Customs and Border Protection (CBP) facilities. The Washington D.C.-based conservative think-tank then continued tracking the movement of the devices across the country over the course of at least a month in January 2022.

Catholic Charities of the Rio Grande Valley and the Del Rio and Val Verde CBP processing stations in Texas were among the more than 30 migrant facilities that were “geofenced” for data tracking in a report released in December by Heritage.

In the report, Heritage says that the cell phone location data was used to “test the anecdotal reporting that the movement of illegal aliens through the United States is being facilitated not just by the federal government under President Joe Biden and (DHS) Secretary Alejandro Mayorkas, but also by NGOs.”

That report raised red flags with privacy experts over how the organization obtained the cell phone location data and the individuals that it might have included.

Beryl Lipton, an investigative researcher at the Electronic Frontier Foundation, explains that similar data is legally available for sale, and that marketing companies commonly buy it from brokers or cellular networks.

However, Lipton said that the data capture at immigration facilities described in the Heritage report is especially alarming.

“It wasn't clear how they got the information. All they said [in the report] was ‘obtained’,” Lipton said. “It’s not clear to me why the information of people who have possibly been assigned a cell phone by ICE [U.S. Immigration and Customs Enforcement] should also be caught up in this sort of public exchange of cell phone location data.”

Lipton is referring to the devices assigned to migrants under the “alternatives to detention” program, or ATD. Under ATD, the federal government assigns “SMARTLink” devices to track the location of migrants after they are released from federal custody.

ATD was supervising 164,391 individuals in the month that Heritage geofenced the locations, according to the nonprofit data research center ‘TRAC Reports’ at Syracuse University. Lipton explains that SmartLink devices were almost certainly present at the locations tracked by Heritage.

The Heritage report claimed that the devices tracked were carried by migrants, and that this was confirmed “based on first-hand observation” at facilities.

Mike Howell was a political appointee in the Department of Homeland Security (DHS) during the Trump Administration. He is now the director of the Heritage Oversight Project, the program which produced the report.

“What we want people to take away from the report is the shocking finding that virtually every single congressional district in the United States is being impacted by this border crisis,” he said. “The American people deserve to know who's coming into their country and where they're going. They stand by the use of such data.”

At EFF, Lipton said she is specifically concerned about how Heritage obtained the data because SMARTLink devices are owned by GEO Group, the same company that generates profits from migrant incarceration.

“GEO Group is a private prison corporation that has a lot of interest in ICE detention centers being full,” Lipton said. “So if they were at all involved in the way that the Heritage Foundation obtained this information, then that's particularly disgusting because the entire report very clearly has an agenda.”

“I'm not going to comment on our sources and methods because obviously there's a lot of forces at play that have stakes in this border crisis continuing,” he said. “And a lot of them are at the federal government. We're not going to give them any assistance in coming after us. The data speaks for itself.”

A GEO Group spokesperson said in a statement that, “GEO has no knowledge of The Heritage Foundation’s methodology or how it obtained the information for its report. What we do know is that it did not come from GEO or any of its subsidiaries.”

When asked if the data had been obtained specifically from GEO Group or any of its subsidiaries directly, Howell responded, “I'm not going to comment whether to deny or confirm any of those aspects. We just stand by our report.”

Lipton said that there are multiple ways that Heritage could have obtained the data, and even having sourced it directly from GEO Group may not necessarily represent legal wrongdoing. In turn, even if the data was not obtained from GEO Group, Heritage may still have caught SmartLink devices and the devices of U.S. citizens in its geofence net.

The report from Heritage showed cell phones moved from facilities located in the U.S. near the border with Mexico to other parts of the country. Heritage claimed that this movement showed that NGOs were “actively transporting illegal aliens.”

However, while the Department of Justice specifies that “domestic transportation of unauthorized aliens” is illegal, both the report from Heritage and Howell declined to use that word to characterize the actions of NGOs who offer aid to migrants.

Historically, NGOs have worked directly with CBP and ICE by providing extra capacity when DHS has not been able to hold migrants in detention.

The migrants who can be found at NGO shelters in the U.S. have been released by the federal government and are allowed to remain in the country legally, pending immigration court proceedings.

“We are accusing them of doing something wrong in the moral and patriotic sense,” Howell said. “They’re completing the final chain of a human smuggling string that starts when the cartels drop off people at the border.”

Aaron Reichlin-Melnick, policy director at the American Immigration Council, a nonprofit advocacy, explained that the report was not right to suggest that migrants or NGOs are doing anything illegal or inappropriate.

“We should be proud, not angry, about the ways in which volunteer organizations have worked together with federal, state, and local officials to stand up a collaborative model of border management.”

Despite this, NGOs that work in tandem with federal agencies to offer aid to newly arrived migrants have been the recent targets of criticism and calls for investigations.

Most recently, Gov. Greg Abbott called on the state’s attorney general to investigate whether NGOs were transporting “illegal immigrants across our borders."

And also in Texas, Republican Congressman Lance Gooden wrote to Catholic Charities that the Congress scheduled to convene this month would begin an investigation in 2023 into “potential violations of federal law and misuse of taxpayer funds” by the organization.

Gooden told Catholic Charities in the letter that the organization “could be subject to prosecution.”

Despite the threats of investigation and the publicly distributed reports and letters, Reichlin-Melnick said that there would likely exist no legal basis for such actions.

“This is fully endorsed by the federal government,” he said. “They help provide assistance to NGOs responding to migrants through the Emergency Food and Shelter Program, a program which Congress has specifically authorized to reimburse organizations helping respond to the situation at the border.”

Lipton said that regardless of the politics, the privacy implications of the approach taken by Heritage to research its report extends beyond immigrants and immigration policy.

“There are a lot of security concerns here for people who are U.S. citizens,” Lipton said. “Just because they use part of this information to say there might be people who are migrating to other parts of the country doesn't mean that they don't have all of that information for everybody else who were at those locations at those times.”

Apart from the possible inclusion of mobile devices that might have belonged to U.S. citizens by way of the “geofencing” used in the report, Lipton said the ability of Heritage to locate political opponents geographically as they travel throughout the country was also concerning.

“I think it’s terrifying,” Lipton explained. “Because these people clearly have an agenda and they clearly have some basic understanding of where people who are opposed to their ideology are spending their time.”

When asked if Heritage would seek to bring a legal case in the matter, Howell said, “I would say all options are on the table.”

Catholic Charities did not respond to TPR's request for comment.

“Many NGOs run on shoestring budgets with little room for expensive legal fights,” Richlin-Melnick added. “There’s no doubt that a vexatious lawsuit brought against them, even one with little chance of success, could potentially harm an NGO. ... I also expect that many NGOs will be considering whether to hire additional security to defend against possible threats caused by bad actors who seize on reports like this to target them.”

TPR was founded by and is supported by our community. If you value our commitment to the highest standards of responsible journalism and are able to do so, please consider making your gift of support today.
Tags
Border & Immigration Top StoriesHeritage FoundationGEO groupdata trackingmigrantsCell phonesRio Grande Valley 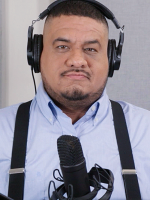