San Antonio cinema fans can experience a classic silent film in a not-so-silent way this Friday evening, July 15 at the Slab Cinema Arthouse.

Austin-based Montopolis will perform a live score to the 1929 silent film, “Man with a Movie Camera.” Montopolis is an indie chamber music group that specializes in innovative, multimedia performances.

Montopolis’ artistic director is Justin Sherburn, who first composed a score for “Man with a Movie Camera” in 2011. Sherburn is an accomplished composer and musician, who has composed for many forms of media and performed in musical groups spanning a variety of genres. Montopolis took this performance on tour a decade ago, allowing audiences to experience the film alongside the live music. Now, in 2022, it’s back.

“‘Man with a Movie Camera’ is a fantastic film,” Sherburn said. “It's very timeless, it feels like a modern film.”

The film is an experimental documentary that greatly influenced the development of cinema. It was directed by Dziga Vertov, and contains no characters aside from the titular cameraman that is shown capturing life in the Soviet Union through a lens. It is renowned for its editing by Yelizaveta Svilova, camerawork by Mikhail Kaufman and the use of groundbreaking cinematic techniques.

“It's just an incredibly interesting film to look at because they used, basically, they used every available special effect that was known and even invented some during the making of the movie,” Sherburn said.

And while it may be from 1929, Sherburn doesn’t see the film as a relic of the past at all.

Due to the Russian invasion of Ukraine, it might be more relevant than ever. While some of the footage was shot in Moscow, a significant amount was filmed in Kiev and Odessa. With the costs of war in Ukraine dominating the headlines, Sherburn hopes that this performance can help connect people to the situation in a more human way.

“It's a wonderful document of life in Ukraine in the twenties,” he said. “I thought it would be very relevant and give people context about the current events there.”

“Man with a Movie Camera” was originally commissioned by Joseph Stalin as a propaganda piece, but Sherburn believes it can be transformed into a more empathetic work of art that connects audiences with the people onscreen.

“I wanted to repurpose the film as more of a celebration of the human spirit,” he said.

The film includes plenty of industrial visuals from factory machinery to railways. But it also showcases many everyday, human moments, and Sherburn’s music brings these aspects to the forefront. The score is lively and exciting, and can be streamed on Spotify. In Sherburn’s words, “it's a little bit of rock and roll and a little bit of chamber music.”

Friday’s show will be somewhat reduced from the original, featuring just Sherburn on piano along with a guitarist. That’s not the only update to the performance, however.

“The bigger change, though, was really just leaning more towards Ukrainian identity,” Sherburn said. “We play the Ukrainian national anthem at the top of the movie. I quote a bit from one of my favorite Ukrainian contemporary composers, (Valentin) Silvestrov.”

This week’s performance is only a preview of what’s to come. Montopolis has already scheduled September tour dates for “Man with a Movie Camera,” in which string instruments will be included. Montopolis will bring this show back to San Antonio on Sept. 3, at Brick at Blue Star. Afterwards, they’ll be off to Fort Worth and then to seven other states for this phase of their tour.

The show on Friday will be held at the Slab Cinema’s Arthouse located at the Blue Star Arts Complex. Tickets can be purchased for $12 here. Proceeds from merchandise sales will be donated to UNICEF to support humanitarian aid in Ukraine.

TPR was founded by and is supported by our community. If you value our commitment to the highest standards of responsible journalism and are able to do so, please consider making your gift of support today.
Tags
Arts & Culture San AntonioClassical MusicSlab CinemaFilmUkraineAustinTPRTop Stories 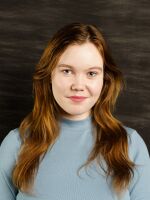