Sharon Isbin performs songs of 'love and longing' in concert

Guitarist Sharon Isbin and soprano Jessica Rivera team up for a program of seductive Spanish melodies on Sunday, February 6 at 3:15 p.m. for the San Antonio Chamber Music Society. Isbin joined TPR's Barry Brake on "Classical Connections" this week. Below is a transcript of the segment.

Barry Brake: Classical music on KPAC San Antonio from the composer Francisco Tarrega, that is his "Capriccio Arabe" from the album "Alma Española" by the guitarist Sharon Isbin, one of the great classical musicians around today. And she's not just around. She's in San Antonio performing at Temple Beth-El. This week, February 6th, and she's with us right now. Good afternoon, Sharon.

Sharon Isbin: Hello, Barry, how are you?

Barry: I'm doing great, and it's so great to have you on the show. I've always enjoyed your playing and it's so exciting. You're performing this Sunday with Jessica Rivera for the San Antonio Chamber Music Society. Tell me all about it.

Sharon: Well, we're doing a program that's really very beautiful music from Spain and Latin America, plus a work by the Persian-American composer Richard Danielpour that had been written for me, called "Of Love and Longing," inspired by poetry created and written by Rumi. So it's a very eclectic and diverse program. You'll hear music by Manuel de Falla, the Seven Popular Spanish songs and you'll hear music by Golijov, his "Lúa Descolorida." Montsalvatge, another Spanish composer, two of his Cinco Canciones Negras, and the aria from "Bachianas Brasilieras" number five, of Villa-Lobos, a much-cherished and beautiful song that many people will recognize. In addition to the Danielpour "Of Love and Longing," and interspersed throughout the program, I'll be doing solos by Antonio Lauro, Agustin Barrios Mangore, the famous fellow who was nicknamed the Paganini of the jungles of Paraguay and as well Isaac Albeniz,

Sharon: This is one of the tracks from the album I did with Isabel, called Alma Española, an album of all Spanish music rather historic for the first time in 40 years of featuring songs of this style for voice and guitar. And I did a number of the arrangements, including of this "Granada." It's a work you'll recognize it extolls the beauty of the Andalusian city and the countryside, and what you might see if you were to visit the Alhambra, which is nearby in Granada.

Barry: And this is your own arrangement, then.

Sharon Isbin: Yes, this is my own arrangement, and I'm thrilled to do it with Isabel Leonard, and I hope you enjoy it.

Barry: Here it is on KPAC, music by Augustin Laura.

Barry: Dramatic music by Augustin Lara called "Granada," performed by Sharon Isbin and the soprano Isabel Leonard, and that's from their album "Alma Española." Sharon Isbin's own arrangement of that piece of music, and she's with us today and she's going to be with us this coming Sunday, February 6th for the San Antonio Chamber Music Society. Sharon, I just can't wait.

Sharon: Well, thank you, Jessica and I are looking forward to this concert. We made our debut together at the Aspen Music Festival in 2019, and we had just such fun playing together that she suggested we should take this on the road. So that's what we're doing. And we began in the fall and here we are now. After Houston and Kansas City, we've landed in San Antonio.

Barry: Doing a tour during challenging times, I might add.

Sharon: Well, you know, I'm I would say that this pandemic was sort of made for me because I have traveled for the last 20 years wearing an N95 mask in all airplanes and trains and never once got sick. So I encourage everybody to be vaccinated, boosted and wear a mask.

Barry: That's a smart, traveling classical musician right there! The San Antonio Chamber Music Society, SACMS, that's San Antonio Chamber Music Society, SACMS.org, that's where you get all the information about this coming February 6th. Now, Sharon, we're about to hear the Chris Brubeck Concerto for Guitar and Orchestra, a world premiere recording from your album "Affinity." Tell us about what we're about to hear.

Sharon: Well, "Affinity" is an album that I released in May of 2020 in the middle of the pandemic, of course. And what you're going to hear is the title track from that "Affinity" is the name of the concerto that Chris Brubeck wrote for me. It pays homage to his father, the famous jazz player, pianist and composer Dave Brubeck. In fact, it was released in time for Dave Brubeck's centennial. And Chris uses, you'll hear in the slow section. It's a one movement through piece that has various different sections to it. And in that particular slower part, he takes a beautiful ballad that his father wrote called "Autumn" and reconfigures it and arranges it. And it's really quite the haunting heart and soul of the piece that is surrounded by all kinds of very fast, virtuosic and idiomatic music for the guitar that is opening and closing the work. So you have everything from Middle Eastern components to jazz components, and it's really a very exciting piece to play. I've done it with a number of orchestras at this point, so I was thrilled to be able to make this recording with the Maryland Symphony Orchestra conducted by their wonderful leader, Elizabeth Schulze. And we put it on the album with music by Danielpour that's going to be featured in the program in Houston, as well as music by Tan Dun from China. Antonio Lauro, Leo Brower, of course, the famous Cuban composer-guitarist. So all of this music on the album was actually composed for me, and that's the theme that brings it together.

Barry: I love it. And let me tell you, if you're a composer, you can do no better than to get your world premiere recording done by Mr. Sharon Isbin.

Sharon: Well, thank you Barry. It's really an honor for me to be able to work with brilliant writers like Chris and so many others. I've had about 80 works to date written for me, and it's a chance not only to expand the horizons of the instrument, but to also bring new ideas and new sounds to the fore that would had never happened before. So all of that is is really very humbling to be able to do, and it makes my my world of music all the more exciting.

Barry: Guitarist Sharon Isbin, in town this Sunday, February 6th for the San Antonio Chamber Music Society. SACMS.org. The concert is at Temple Beth-El at 3:15 p.m. Sunday with Sharon is been on guitar. Soprano Jessica Rivera. Sharon, thank you so much for joining us.

Sharon: It's a pleasure. Very wonderful to talk with you and I look forward to the show. 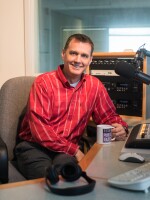