By Rob Schmitz,
A Martínez

Hundreds of thousands of people are picking up the pieces from the worst natural disaster Germany has suffered in 60 years. Flooding in the region has left more than 180 people dead in Germany and Belgium. And many are still missing.

NPR's Rob Schmitz spent the day in one of the worst-hit towns. And he joins us now. Good morning, Rob. First, tell us where you were and what you saw.

ROB SCHMITZ, BYLINE: Yeah. I was in the town of Bad Neuenahr-Ahrweiler. It's in a winegrowing region in the hills southwest of Bonn. Last week, the town received two months' worth of rain in just two days. And it's left the town looking like it's been bombed.

SCHMITZ: Helicopters survey the damage from above - huge stone bridges smashed in two, crushed cars tossed throughout the town, random scraps of lumber. Parts of houses and uprooted trees line the streets. And all of it is covered in thick, brown mud. This town is nearly a thousand years old. And a small river called the Ahr splits it in half. The Ahr is really a creek. And it's typically only inches deep. But on Wednesday night, it rained so much that within a few hours the creek rose by more than 20 feet, carrying debris that destroyed everything in its path body.

Claudia Krah remembers the sounds outside her home as she scrambled to the top floor.

CLAUDIA KRAH: The horrible sound of smashing cars and smashing glass - that was a - I get goosebumps when I'm thinking about this, yeah. The cars smashed through the trees. And you hear the trees, like, knocking (ph). And you said, OK, please, please don't fall.

SCHMITZ: A few houses down from Krah, Martin Larsson was taking a walk outside in the rain when he also heard strange sounds.

MARTIN LARSSON: And then I heard the river, yeah. It was roaring. And that's not normal. And I heard logs from the river, trees banging into the steel - yeah - just bang, bang. It's a noise that I never heard before. And I said, OK, this is not normal.

SCHMITZ: Then he noticed water gushing out of the storm drains in front of his house, filling the street with mud. He drove his car to higher ground, ran back to the house, where he and his wife woke up their three kids, and ran in their pajamas through the rising water from their house. That's when they realized they left his mother-in-law and his wife's grandmother inside their house next door. He says it all happened too fast.

SCHMITZ: Electric lines and cellphone towers were suddenly down, cutting off families from each other. Dozens of people died in this village. Fortunately for Larsson, his mother-in-law and his wife's grandmother survived by holding out on the third story of their home. A brown line just above the second floor of their house marks the high-water line. Like everyone here, Larsson is covered in mud, from his waders to his Cincinnati Bengals cap. Somebody's got to support this team, he jokes. And that's exactly the kind of spirit his coworkers brought to him.

LARSSON: We got some super help from my colleagues. I work 30 clicks from here. And they are not hit by the high water and the flooding. And they just - like, they told me the day after, yeah, we're coming. We'll help you. Yeah, so yesterday I had 40, 50 guys - men and women here just helping me, clearing out the whole house.

SCHMITZ: The town's streets are now lined with one-story-high piles of muddy sofas, dining room tables, broken windows and beds. Friends and family pile it up. And bulldozers come to push it all aside. Down the street, Jens Karos has help, too.

SCHMITZ: He's got a team of friends with chisels pulling up his hardwood floor. He takes me on a tour of what used to be his downstairs living room, now filled with water.

JENS KAROS: When you take a look inside this room, you know how it looked everywhere else. There's nothing usable - nothing.

SCHMITZ: The room is piled to the ceiling with furniture, appliances and mud. His backyard is filled with trees and random junk from upstream, too. And there are more tragic stories underneath all of this. It took two full days for his neighbor to discover a dead body under a pile of debris washed up against his backyard hedge. Karos is just happy his family is alive. His young children managed to sleep through this horrible disaster. They were safe and snug in their third-floor bedroom.

KAROS: Of course it was loud. But it was like water. And maybe they find it interesting in their - just dreams (ph), or something like this. And we were really, really happy that they slept.

KRAH: ...Because all the things we have stored in our rooms. (Laughter).

SCHMITZ: All those things are now gone. And she says she's looking forward to starting over. And before I leave, she runs through the mud upstairs and emerges from her second-story window with a flag bearing her town's coat of arms - a cross and an eagle. She says it's a sign that this 1,000-year-old town, no matter how bad it looks now, is still alive.

MARTINEZ: Rob, German Chancellor Angela Merkel made an official visit to the region yesterday. What did she have to say?

SCHMITZ: Well, she was reassured by how people and communities are sticking together. And she also mentioned the role of climate change in a tragedy like this. Here's what she said.

SCHMITZ: She's saying here that you can't draw conclusions from one event but that if you believe the science, like she does, the sheer number of such extreme weather events that we've seen in Germany indicates that this has all to do with climate change.

MARTINEZ: And does the science bear that out?

SCHMITZ: Well, according to scientists here in Germany, it does. According to a recent study called the Global Climate Risk Index, Germany is among the top 20 countries in the world most impacted by climate change. And it's worth noting that before this region received two months' worth of rainfall in just two days, there was a years-long drought.

SCHMITZ: And he's saying here that this year basically shows what can happen because of climate change. On one hand, we have a persistent drought and now all the sudden very heavy rainfall, which can't be absorbed by the soil because it's too dry. And that leads to heavy flooding.

And people in the town where I reported yesterday told me the same thing. They were all convinced that this disaster related not only to climate change but also to overdevelopment in the region. One man told me that the Ahr River had been engineered and manipulated from a winding, meandering waterway into almost a straightaway canal over years of development and that this may also have played a part in worsening the floods.

MARTINEZ: And looking ahead just for the next few days, are these towns - can they start recovering, or is there any rain on the way?

LARSSON: Well, the rain's over for now. But the area's far from recovered. Residents told me that it'll be weeks before electricity is restored and months before they'll have gas. The region doesn't have clean drinking water. So the German military is sending convoys of water trucks to deal with that. But after spending a day in the disaster zone, it's clear that the military, fire crews, family and friends are doing a very good job at cleaning up these devastated towns.

Rob Schmitz
Rob Schmitz is NPR's international correspondent based in Berlin, where he covers the human stories of a vast region reckoning with its past while it tries to guide the world toward a brighter future. From his base in the heart of Europe, Schmitz has covered Germany's levelheaded management of the COVID-19 pandemic, the rise of right-wing nationalist politics in Poland and creeping Chinese government influence inside the Czech Republic.
See stories by Rob Schmitz 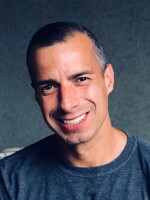 A Martínez
A Martínez is one of the hosts of Morning Edition and Up First. He came to NPR in 2021 and is based out of NPR West.
Latest News