At the Terrell State Hospital, about 30 miles east of Dallas, there are now 20 more inpatient beds for veterans in need of psychiatric care.

Tim Bray, associate commissioner of state hospitals with Texas' Health and Human Services Commission, opens the door to one of the rooms in the new unit. It looks sort of like a college dorm, with sparse furniture, bookshelves and three single beds.

"It may not look like much," Bray says, "but keep in mind that the safety of our patients is the of utmost importance here."

The new veterans unit in Terrell opened July 1. By last week, it was already halfway full. This is one of 10  state hospitals run by the Texas Health and Human Services Commission, or HHSC. Every year, the hospitals provide care for about 7,800 Texans with mental health issues. Facilities are spread across the state, and many are in need of upgrades. Some of the oldest state hospitals were built in the 1850s.

As the state's population continues to climb, the system has struggled to keep pace with the growing demand for mental health care. A 2017 report from the HHSC points to the hundreds of people on waitlists for state hospitals. The commission has now launched a multi-year effort to expand capacity, adding about 650 beds, and improving the quality of care throughout the system.

"Building all new hospitals will take some time," says Mike Maples, deputy executive commissioner for HHCS's Health and Specialty Care System. "So we have worked hard to become more efficient with our resources and because of this, we've been able to begin to reshape how we deliver services today."

Maples says this unit will provide specialized care for veterans. Many of the 51 staff members who work here have served in the military themselves. Patients will also attend peer support meetings with other veterans.

Some of the goals of the program are stabilizing psychiatric patients, treating substance abuse disorders, and restoring the competency of vets who come in through the criminal justice system.

Maples says a handful of veterans who were already at the Terrell facility have been transferred to the new unit.

"As we were going through the folks who we serve, and the persons waiting to get in, it became an obvious need of ours," Maples says, "and certainly paying back and supporting the veterans who have served this country is really important to us."

The HHSC says veterans in other state hospitals can request to be transferred to the new unit in Terrell. Maples think there are other eligible patients in the state hospital system who haven't been identified.

In the coming months, Maples says state officials will see how the program's working — how quickly veterans are recovering and leaving the Terrell State Hospital.

"We want people's stay [here] to be as short as possible and get them back to their lives," he says. 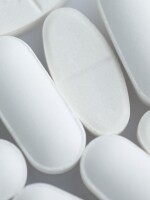