Josh Glenn Experiment Is As Experimental As Music Gets

From a glance, Josh Glenn seems like your average folk musician. He has the requisite handsome beard and flannel shirt. While getting ready to perform in our B40 studio, he takes out his seasoned guitar and pedal assembly, connects them to an audio recorder, and starts playing various chords that are interrupted by a silence or an occasional bang on the body of his guitar. I am left very confused. Do all of his songs sound like this? They do. At the end of the performance, Josh can tell how puzzled I am and laughs. “Wait until you hear the whole thing.” I put on the headphones connected to the audio recorder, and I am immediately blown away. What seemed like a guy playing around with his guitar turns into a harmonious blend of layered guitar riffs, beats, and vocals.

If you ever watch Josh perform live, know that his guitar pedal, A.K.A the ‘Green Machine,’ is the co-star of his performances. While other bands rehearse the same songs countless numbers of times and are made up of different instruments, Josh’s one-man band takes an avant-garde approach by going up on stage and experimenting with his pedal. Hence the name “Josh Glenn Experiment” was born. “I just liked that idea of experimenting and threw the word ‘experiment’ at the end of my name to give it an exclamation instead of it just being my name.”

Josh wasn’t always playing solo though. His previous project, Nat’l Parks, was a band consisting of him and two other musicians. Although the band broke up, he says the lessons that he learned from his former band members helped make him the musician he is today. “I credit a lot of the discipline that I have, like sitting in a room and playing the same kind of notes over and over, to the guitarist that I was playing with at the time. The [other] bandmate that I played with— he kind of opened my eyes up to jazz, and a classical approach to playing. I was just more of an indie/folk singer/songwriter, just playing basic chords, and he opened my eyes to how to open up the fret board and how to play different chords.”

Josh states that his songwriting is a “process.” The songs are often pieced together from random ideas, whether from scribbled riffs saved in his notebooks, to fresh new thoughts in his mind. “I take these small unfinished ideas and songs and just throw them out there and play it for people, just to feed off the energy of the crowd. It fuels the song itself, versus just playing at home.” But even when Josh has finished a song, he knows that it will never have a final version. “When you’re experimenting live on stage, you might come up with something that you’ve never played it that way before. Sometimes it’s really cool and then it just kind of sticks with the songs, so that song evolves into that new version of it. I’ve been playing a lot of these songs for 6-7 years, so they’ve kind of gotten themselves into somewhat of a structure, solid foundation. But there’s still room to play around with it.”

The songs on his latest EP, ‘Orange Moon,’ have been forged after years of experimenting with them live. “They’re not anything that I just wrote in the last couple of years. And if you heard the same songs 5-6 years ago, you might recognize them, but it would take you a minute. You’d have to really listen. They’ve evolved so much.”

Although Josh makes it look easy, it’s not always easy to improvise on stage. “Sometimes those magic moments happen and other times they don’t. If I mess up, I’ll just let go of that and go from feeling, and slowly get it back to something. A lot of times that’s some of my favorite performances, when I initially mess up and then save it at the end. It takes it to a whole other realm. Those are some of the really cool moments. You have to figure out how to work around [a song] and how to add a layer on top of it, so you take it to where you want to take it. It can be a challenge sometimes but that’s kind of why I do it, I like the challenge.

In the future, Josh hopes he can place his guitar pedal aside and play with other musicians in a band. He tells me what it was like at the release party for his ‘As Live As Life Allows’ album, back when he played with Nat’l Parks. “It was so much fun. I’ve played in a band before, but I felt like this was equivalent to having a runners high, when you feel like you just ran so far and you feel like you’re floating on air. I got that feeling when I played with those guys live.. It was just unreal…just feeling the energy of an actual band. It’s one thing to jam out yourself and my looping petal, but another when you’re playing with a band.” Until then, Josh will continue to explore through the depths of his musical style, evolving as time goes on.

Check out his ‘Orange Moon’ on Bandcamp, and follow him on his Facebook page to see what Josh is up to next. 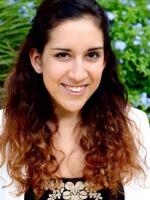 Adriana Carner
Adriana Carner is a senior at the University of Texas At San Antonio, pursuing her bachelor's in Communication with a concentration in Digital Media Studies. She is TPR's 2017 Summer Arts Intern. She is a San Antonio native and graduated from Ronald Reagan High School. Starting her freshman year of college, Adriana became involved in creating short films and doing journalism work. She is the Editor-In-Chief of The Odyssey Online, and does camera work for UTSA's RowdyTV. When she is not filming or writing, Adriana loves to attend concerts, listen to electronic beats and old jazz, and asks too many questions.
See stories by Adriana Carner
Latest News
Related Content