Movies You Missed: 'It's A Wonderful Life'

Now it's time for Movies We Missed, our effort to revisit classic films through the eyes of people who just never got around to seeing them. This week, since 'tis the season, Frank Capra's 1946 classic "It's A Wonderful Life." George Bailey, the small-town banker and community pillar faces a run on his building and loan.

(SOUNDBITE OF FILM, "IT'S A WONDERFUL LIFE")

JIMMY STEWART: (As George) You're thinking of this place all wrong, as if I had the money back in a safe. The money's not here. Well, your money's in Joe's house. That's right next to yours - and in the Kennedy house and Mrs. Macklin's house and a hundred others.

SIMON: George, played by Jimmy Stewart, contemplates suicide on Christmas Eve. Clarence, his guardian angel, shows him what the world might be like if George had never been born. Henry Travers is Clarence. Donna Reed is George's wife. Lionel Barrymore is mean old Mr. Potter.

We're joined in the studio by NPR editors Natalie Winston and Jordana Hochman. Thanks for joining us.

SIMON: How did you miss it?

HOCHMAN: It's the kind of thing when - I don't know if you have this experience, Natalie - but a movie comes on or a book is suggested. And they say - oh, this was so wonderful. You have to read it. And just by that very suggestion, it means that I run away from it and don't read it or watch it.

WINSTON: No one in my family has ever mentioned this movie to me ever.

SIMON: You're kidding me.

WINSTON: Yeah. And every time I saw it as a rerun on TBS, I just turned the channel.

HOCHMAN: I did, too, when I would see that it was on because I assumed it would be bad.

SIMON: Well, all right. So you've seen it. What do you think?

HOCHMAN: Yeah, it's really sweet. And it really - I mean, it really holds up. And not all old classics do.

WINSTON: But here's my question - other than the fact that it ends on Christmas, I don't really see why it's a Christmas movie.

WINSTON: It's, you know, there's spring and summer.

WINSTON: And then it's Christmas, and so it's a Christmas movie.

HOCHMAN: You have to wait a long time for it to become clear that it's a Christmas movie. But it involves, you know, God and some spirituality. There are these, like, talking star constellations in the beginning that set you off.

HOCHMAN: I know, but it takes you some time for that to click.

(SOUNDBITE OF FILM, "IT'S A WONDERFUL LIFE")

LIONEL BARRYMORE: (As Mr. Potter) Happy New Year to you - in jail.

SIMON: We looked into the background a little bit, a guy named Philip Van Doren Stern wrote this in 1939. He couldn't get it published so he turned it into a Christmas card. It somehow got into the hands of Cary Grant's agent, and RKO Pictures paid rights to the Christmas card, I guess - $10,000.

HOCHMAN: This was a 2-hour-and-10-minute movie.

SIMON: Well, they take - what they do is they sell the rights to the Christmas card, and they turn to the highly underpaid screenwriters who all need good editors and say, turn this Christmas card into a...

WINSTON: They did a good job.

WINSTON: ...For a Christmas card.

SIMON: I don't know if it was just a picture. You know, there was probably a story in there. What favorite scenes did you see?

HOCHMAN: I loved when we did the contrast between the town that would exist if George Bailey weren't in it, Pottersville.

HOCHMAN: And we got to see this whole alternate universe.

SIMON: Oh, Sheldon Leonard is the barkeeper. Just a cruel man, isn't he? I mean, the difference between how everybody is nice in the original version and then in the...

HOCHMAN: Yeah. But I have to say I mean, they're nicer in Bedford Falls, but Pottersville looks more fun.

HOCHMAN: Nick's - they've got a piano player. They have - I mean, he runs down the street, and there are bars and strip clubs and pawn shops. And then it just - that seems like a more interesting place to be.

SIMON: All right, the sequel. Natalie.

SIMON: Yeah. It's very sad, isn't it? Any favorite lines?

HOCHMAN: This is a hard one, Scott, just because we haven't - and only having seen it once, yeah.

SIMON: I mean, but I mean what about - I bet you can finish the sentence, every time a bell rings...

WINSTON: An angel gets its wings.

HOCHMAN: That was a nice one.

WINSTON: I think that was in the card.

It's hard. I'm sorry you can't do this without trying to do Jimmy Stewart. OK?

(Imitating Jimmy Stewart) Just remember this, Mr. Potter. This rabble you're talking about - they do most of the working and paying and living and dying in this community. Well, is it too much to have them work and pay and live and die in a couple of decent rooms and a bath?

SIMON: What do you think?

HOCHMAN: I thought that was pretty good, Scott.

HOCHMAN: But, you know, watching this movie, I assumed it was all kind of saccharin and maudlin. And it's really not.

SIMON: It sounds like you liked this movie more than you thought you would.

WINSTON: Yeah. There are a lot of ups and downs. And the ending is - like Jordana was saying, it's more surprising and nuanced than you would expect.

HOCHMAN: And Bert and Ernie.

SIMON: Well - did you not know that's where it comes from?

WINSTON: Right. They do. They do kiss.

WINSTON: It's rather sweet, yeah.

SIMON: It's wonderful talking to both of you.

HOCHMAN: It's a wonderful life.

SIMON: It is a wonderful life.

WINSTON: It's a wonderful life we all have here.

SIMON: That's very true. NPR's Natalie Winston and Jordana Hochman, thanks so much. Oh - and, if I may, lastly - hee-haw (ph). 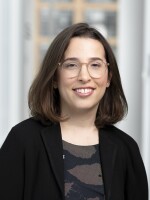 Natalie Winston
Natalie Winston is the Executive Producer of All Things Considered on the weekends. She has led the show through coverage of the Pittsburgh synagogue shooting and many other breaking news events. She also led a remote team for a weekend of coverage from Puerto Rico at the start of the 2018 hurricane season.
See stories by Natalie Winston
Jordana Hochman

Scott Simon
Scott Simon is one of America's most admired writers and broadcasters. He is the host of Weekend Edition Saturday and is one of the hosts of NPR's morning news podcast Up First. He has reported from all fifty states, five continents, and ten wars, from El Salvador to Sarajevo to Afghanistan and Iraq. His books have chronicled character and characters, in war and peace, sports and art, tragedy and comedy.
See stories by Scott Simon
Latest News
Related Content