The Long Road To Tampon Tax Reform In Texas

Holly McDaniel is the executive director at the Austin Diaper Bank, primarily working to distribute diapers and menstrual products to partner agencies around the city.

Usually, she sits in an office or packages supplies in a warehouse overflowing with diapers and menstrual products. But, in the last few months, she headed out to the Texas Capitol to testify at the House Ways and Means Committee.

“You have organizations that are starting to lead the way and working with local policy makers in legislature and so the more you have organizationally and company-wise working, then you can start creating these little groups individually around the country,” McDaniel said. “Just people who care about these things, and so it just kind of like spreads like wildfire hopefully.”

Rep. Donna Howard, a Democrat from Travis County, asked workers at the Diaper Bank to testify for a bill she filed to make period products sales tax exempt.

“It’s a tax on women that shouldn’t be there,” McDaniel said.

It’s no longer there in 10 other states, and while Texas isn’t among them, there’s momentum to make it happen, said Howard.

Her bill didn’t pass. According to Howard, there’s a variety of factors that pose barriers to bills like hers. These include prioritized “red meat” issues, like school finance and property tax reform.

“It’s always going to be a struggle to get that priority list in such a way that we’re taking care of all the things we want to take care of,” she said. “Making feminine hygiene products and diapers sales tax exempt, to me, is a priority.”

2017 was the first year the Texas legislature saw bills involving menstrual products. There were seven last session, and six this session.

While Howard’s bill met the same unfortunate fate as all the others, both she and McDaniel are optimistic since one finally passed this year.

“I’ve had to learn a lot, obviously in this journey on House Bill 650,” Representative James White said.

White is a Republican from Hillster. He authored HB 650, which reforms the women’s prison system and among those reforms includes making period products more accessible for inmates.

“It's about health,” White said. “And we should have the appropriate amount of hygienic supplies available.”

Part of what he’s learned he owes to “champions” of these issues: female lawmakers around him who he said are continuing to advocate until more legislation is passed.

“Let me tell you something, on this committee right now you've got some tough, strong, smart women,” he said. “I think next session - and I’m hearing not even next session - right now they are going to put the foot on the pedal on this.”

Texas hasn’t progressed as much as some lawmakers and organizations hoped, but White’s bill marked an advance years in the making.

Advocates of the same cause are finding similar success outside the Texas Capitol.

At the University of Texas at Austin, the Women’s Resource Agency created a pilot program and offers students free period supplies in the bathrooms of some university buildings.

Mehraz Rahman, former UT student body vice president, said the program came through months of stigma-ending discussion and ultimately was reinforced by the action back at the Capitol.

“I think for me it really made a difference that lawmakers were willing to take on these issues,” Rahman said. “Seeing Donna Howard writing a bill about the tampon tax or the pink tax it was kind of like, ‘Oh the stuff I’m doing this year is being talked about, not just at UT, so my cause is worthy.’ So, you know, this is obviously something that's worth to take on and keep destigmatizing.”

Rahman saw real changes and with this bill passage, similar advocacy groups anticipate changes as well, like more bills, maybe even more laws. It’s a hope for McDaniel at least.

“It’s gonna be little small steps and then in five or eight years we're gonna look back and say ‘Oh, do you remember when?,” McDaniel said.  “Do you remember when basic hygienic items, like period products, were taxed?”

Something she hopes to one day be a thing of the past. 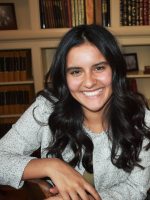 Allyson Ortegon
Allyson Ortegon is a reporting fellow covering the 86th Texas Legislature for public radio stations around the state. She has previously interned for KUT, Austin’s NPR Station. Originally from Cibolo, Texas, Allyson began her reporting career for Schertz Magazine, published near San Antonio. Since moving to Austin, Allyson has reported across multiple platforms including radio, television and print media. She will graduate from the University of Texas at Austin's School of Journalism in May 2020 with a secondary concentration in business.
See stories by Allyson Ortegon
Latest News