Listen
Listening...
/
Steve Walsh reports that the PBS series on the Vietnam War may trigger PTSD symptoms in some veterans.

For two weeks, PBS stations will relive one of the most devisive eras in American history.

"The Vietnam War" documentary - produced by Ken Burns and Lynn Novick - is being billed as a rare cultural milestone. The filmmakers have been planning the series since 2006, meaning their production process was about as long as America's involvement in the war.

The series is designed to be intense. Each episode if preceded by a warning about strong language and graphic violence.

But people who work with veterans say the documentary may be too intense for some of those who fought in Vietnam.

"Some are going to watch it. Few will," said Henry Peterson, a chaplain at the Department of Veterans Affairs in San Diego. He counsels people with PTSD.

Tina Mayes, a VA staff psychologist, said almost anything can trigger the vivid and aggressive thoughts associated with PTSD. A door slam. Smell of diesel. 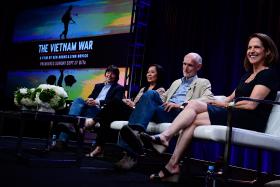 "It can be something someone says. The way they say it," Mayes said.

News, movies, and documentaries are among the most common triggers.

"I would say the majority of veterans that I work with, when their symptoms are high, they're actively avoiding any media," Mayes said.

While PTSD is an issue among veterans of all eras, as well as certain populations of non-veterans, Mayes said people who served in Vietnam are particularly vulnerable.

"Honestly we don't know why, but some of the research suggests that it was because of the way they were received when they came back," she said.

In the 1970s, the VA was often unwelcoming. Society in general appeared, at best, uninterested in the plight of returning vets, and in some places was openly hostile.

Decades later, some vets still live with the symptoms of untreated PTSD, like the aggression that feels like it comes out of nowhere.

"It affects everyone," said Vietnam combat veteran Larry Taylor. "I would say my own wife experienced PTSD just from her relationship with me and the war I fought in."

Before he was treated, Taylor coped by avoiding his triggers. He didn't see Apocalypse Now, The Deer Hunter, or other popular moves about Vietnam. But when the first Gulf War broke out in 1990, he couldn't avoid the constant media coverage.

"Basically after the Gulf War, my PTSD kicked in," Taylor said. "I would wake up screaming. My wife would wonder what's going on. I was having nightmares all the time, during the daytime."

Still, Taylor wouldn't seek treatment for another decade. He's now Chief of Chaplain Services at the VA in San Diego. He plans to watch the 18 hour long PBS documentary.

"I think today I know the difference between a bad memory and reliving a situation," Taylor said. "Fortunately I'm not reliving things the way I once did."

His guidance for vets is: Don't feel obligated to watch. If you do watch, find a loved one to watch with you. Taylor is enlisting his wife of 46 years.

In the past, the VA provided outreach around movies like Saving Private Ryan for vets who were triggered by what they saw. But the agency said it didn't experience a major increase in calls.

This time, the VA is partnering with PBS, preparing to provide counseling to any vets who feel it's time to start working through their own experience with the war.

Can Service Dogs Help Veterans with PTSD? The VA Is Skeptical

A growing number of veterans are acquiring service dogs to help cope with PTSD. But the VA won’t pay for them and says their effectiveness hasn’t been scientifically proven.

Military families move a lot, and that makes it hard for service members’ spouses to hold steady jobs. About half of military spouses are either unemployed or underemployed – and that can take a toll on their families, their earning power, and the economy.

Deported Veterans Hope To Return To Nation They Fought For

Hundreds of veterans - who served in the U.S. military as non-citizens - were later deported for committing civilian crimes.