John Moore, a special correspondent for Getty Images, lived and traveled around the world for years before deciding to focus his time and work on the U.S.-Mexico border. His frequent requests to photograph Border Patrol agents dealing with families crossing the border went unanswered – until one day last year when he got a call out of the blue.

Officials invited him to photograph one shift of work in McAllen, Texas. That call led him to capture an image of a Honduran toddler crying as she watched her mother being searched by Border Patrol agents. The girl would become the face of the debate over U.S. immigration and border policy.

"I think, in some ways, the reason why that photograph was published so widely and became viral online is probably because of the possibility that that mom and that daughter may no longer be together," Moore says. He learned a week later they weren't separated.

The photo won  World Press Photo of the Year on Thursday.Moore talked to KUT during a March visit to UT Austin, his alma mater. He explained the events leading up to his taking the photograph and why he thinks certain images can have a lasting impact. He also discusses what happened to the mother and daughter after the photo was taken.

This post has been updated to reflect Moore's win. 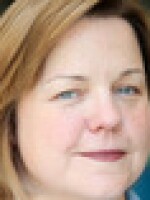 Jennifer Stayton
I feel very lucky to have been born and raised right here in Austin, Texas. An English teacher at my high school, St. Stephen’s Episcopal School, once suggested to the class that we tune in to KUT 90.5 for Paul Ray’s “Twine Time.” I have been a public radio fan ever since.
See stories by Jennifer Stayton
Latest News