Here's something I did not know. Some creatures are so small and difficult to track that it's hard to tell if they've gone extinct or not. That's the case for a species called Franklin's bumblebee. No one has seen it for more than a decade, but the last person who identified it in the field isn't giving up. Jes Burns of Oregon Public Broadcasting's EarthFix team reports.

JES BURNS, BYLINE: If an octogenarian entomologist could be a superhero, Robbin Thorp might be a good candidate.

BURNS: He moves slowly along the Pacific Crest Trail near Ashland, Ore., a hero's gadget in hand, what appears to be a ray gun straight out of the comics. But instead of shooting things, this gun sucks them up.

BURNS: He vacuums up a female worker bee...

THORP: And it has a little magnifying lens.

BURNS: ...To identify the bumblebee trapped inside the chamber. It's not Bombus franklini, the bumblebee Thorp has traveled to Mount Ashland to look for, the bumblebee he was the last person on the planet to see alive. So he lets her go.

THORP: They don't like to be imprisoned for a while. But other than that, it doesn't hurt them.

BURNS: For this particular mission to find Franklin's bumblebee, even a superhero like Robbin Thorp needs sidekicks.

THORP: Alright, you guys. Gather round.

BURNS: And he has about 30 today standing on the edge of a meadow near the Oregon-California border, where the wildflowers are putting on a show. Jeff Dillon with the U.S. Fish and Wildlife Service organized this year's search.

JEFF DILLON: Hopefully, this year will be the year we find the Franklins. If you think you have captured one of those, please get them back to Dr. Thorp right here. He's our authority on the species.

BURNS: It's not just the Franklin's bumblebee population that's crashed. Worldwide, bees are facing significant challenges due to habitat loss, pesticide use and climate change. Thorp believes that disease caused the disappearance of the Franklins.

THORP: Any species that disappears is always a big deal to me anyway. And it's of concern when one or more start declining. And in this case, there’s a couple of very closely related bumblebees that have declined in the West.

BURNS: Bumblebees are important pollinators because they work flowers in a different way than honeybees, says Kristi Mergenthaler with the Siskiyou chapter of the Native Plant Society.

KRISTI MERGENTHALER: They go up to the flower. They grasp it. And then they buzz in the certain frequency, usually the note of C. And the pollen comes out like a salt shaker.

BURNS: About 8 percent of the world's flowers are buzz-pollinated, including several agricultural mainstays like blueberries and potatoes. The hopeful bumblebee hunters disperse into the meadows, swiping at purple mint flowers with nets. One after another brings Thorp possible Franklins to identify.

THORP: No. Found a bumblebee, but not the rare one yet. 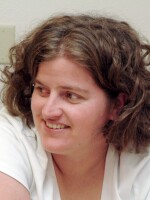