Military C-130 and C-17 aircraft have been outfitted with medical equipment, as the Air Force flies patients to hospitals in the mainland U.S.

Air Force Major Gavril Goodman was on one of the first humanitarian evacuation flights that landed in St. Croix five days after the category 5 hurricane destroyed the island's power grid.

They were told to expect 40 patients. Instead, there were 63, all with end stage renal disease.

"They were all on dialysis," Goodman said. "So after an extended period of time, these people become very, very sick."

All 63 patients were evacuated to Dobbins Air Reserve Base in Georgia where a team of seven doctors met the plane.

Goodman said the patients hugged her as they left. She will remember one man in particular.

"He actually asked to keep the blanket that we provided on the aircraft," Goodman said. "He said, 'I have nothing. May I please have this blanket? I lost everything.'" 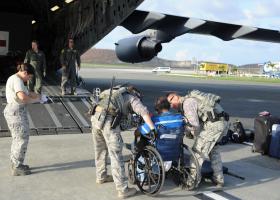 Goodman and members of the 45th Squadron spoke as they prepared medical equipment and supplies for their next mission. They worked inside a warehouse at MacDill Air Force Base in Tampa.  Just outside, C-130 and C-17 aircraft were parked on the tarmac ready to be outfitted like flying ambulances.

So far, the Air Mobility Command has flown more than 45 missions and 500 patients in need of medical care and family members.

The humanitarian mission reinforced why Goodman, a single mom with a full-time, civilian nursing job, also serves in the Air Force Reserves.

"It is worth the sacrifice," she said. "My parents were proud of me, my kids, my daughter. She's actually 7 years old. She's so happy."

Family support is important to Goodman and most reservists, who can be called up with little notice.

Captain Michael Ofman is a trained nurse practitioner who was on a business trip for his job with an electronic medical records company when he was notified to report.

"I got the call when I was in Seattle," Ofman said. "I left Seattle immediately, flew a red-eye home here." 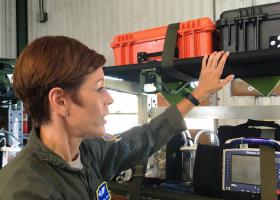 Ofman credited his partner with packing his bags and leaving them and his car at Tampa International Airport, so he could go directly to MacDill when he landed. Ofman has served 21 years on active duty in the National Guard and Reserves. He is retiring in fewer than 40 days, but he'll take memories of his St. Croix mission with him.

"One of the daughters of a patient we were taking care of, I offered her a meal," he said, "and when she opened a lunch box of peanut butter and jelly sandwiches and some crackers and a bottle of water, she began to cry because it was her first whole meal."

"At that moment, you realized that they had nothing," Ofman said.

Family was also on the mind of Master Sergeant Marie Ayala, a mother, grandmother, and a civilian medical assistant who has served in the Reserves for 10 years. Alaya was on one of the first missions to St. Croix, all the time not knowing the fate of her own parents and sister who live on the west end of Puerto Rico.

"This is my mission to evacuate people in need," Ayala said. "Eventually, it's going to be my people, my Puerto Rican family."

Ayala did hear from her sister almost a week after Maria took out communications. She said her family is fine for now.

The 45th Aeromedical Evacuation Squadron most likely will remain activated for weeks. So, there's a good chance that Ayala will indeed be part of the relief effort in her Puerto Rican homeland.

An Air Force reserve crew flew from JBSA-Lackland to Houston with relief supplies on Wednesday.  It was the first heavy cargo load to be airlifted to the flood-ravaged city.