Power Of The Past: Retelling Utah's Suffragist History To Empower Modern Women

When Neylan McBaine told her friends in Brooklyn that she was moving to Salt Lake City a few years ago, she was shocked by the negative reactions she got. People warned her that Utah was unfriendly to women.

"I got a lot of comments that my girls were not going to be raised in an environment that empowered them," she said. "They were going to be told that they couldn't work, and would have no examples of modern women to look up to."

Utah had always been the homeland of McBaine's faith, as a member of the Church of Jesus Christ of Latter-day Saints. The negative perceptions of Utah's women rattled her.

Ready to prove all the haters wrong, she and her family moved West. It turns out that, in at least one way, her friends back in New York City had a point.

"My children have very few peers who have moms who are professional women," she said. "The more we're told that we are the worst place for women in the United States, the more that becomes a reality."

Determined to change this national narrative, McBaine started a grassroots organization called Better Days 2020 to teach people what Utah women were doing 150 years ago. Specifically, pioneering the right to vote.

A suffrage experiment that nobody would object to

Utah women were enfranchised 50 years before most American women, and they were the first women in America to vote under an equal suffrage law. They may have simultaneously advanced the cause of women's voting rights, and set it back.

Voting in Utah started with a joke in a newspaper. In the 1800s, the idea of women voting was just a fringe movement on the East Coast until The New York Times had a clever idea.

"Female suffrage might perhaps be tried with novel effect in the territory of Utah," read an editorial in 1868. "Perhaps it would result in casting out polygamy and Mormonism in general. Here would be a capital field for woman suffrage to make a start, and we presume nobody would object to the experiment."

When this idea reached the women and men in Utah, they loved it. Yes, enfranchise women in Utah. But rather than casting out polygamy, Utah women hoped that voting would finally prove that they had chosen the Church of Jesus Christ of Latter-day Saints — or Mormonism — willingly.

"They really wanted to counter the notion that they were being coerced," said Laurel Thatcher Ulrich, Harvard historian emerita. She's author of the book A House Full of Females about polygamy and women's rights in early Mormonism.

Polygamy was decried as a form of "barbarism" in the 1800s, and the women who were married into polygamous families were often seen as victims of a fanatical religious sect.

If these polygamous women voted, people in Utah reasoned, they might prove that gender relationship among the Latter-day Saints were more nuanced. "They wanted people to know that they were intelligent, that they understood their rights as citizens," Ulrich said.

Women in the Wyoming territory had been enfranchised a few months earlier, but Utah had an election first. On Valentine's Day in 1870, the women of Utah started voting. Women's suffrage — and voting rights in general — did not extend to most of the Native Americans in Utah for decades.

The New York Times amended its endorsement of women's suffrage in Utah. "Let's let them vote, but if they vote the wrong way, let's cancel the vote," Ulrich summarized.

That's exactly what happened. Women's suffrage in Utah was revoked by the U.S. government 17 years later.

But the damage was done.

"There are hundreds of examples of the way the Mormon vote in Utah impeded the progress of suffrage in the rest of the country," Ulrich said.

Women's suffrage was tainted for decades by association with theocracy and polygamy.

"Woman suffrage is part of the feminist movement, and is wanted by every socialist, every I.W.W. (labor union) and every Mormon," read an advertisement against women's suffrage in a Boston newspaper in 1915. "Do not join hands with these enemies of the home and of Christian civilization."

The advertisement was right — Mormons did want women's suffrage. Having tasted the power of voting, Utah women worked furiously to get the vote back. Once they did, they worked side-by-side with national suffragists to secure an amendment to the Constitution.

Using the past to change the present

"Utah early on understood that women brought a value and a perspective that was needed to public life," said Deidre Henderson, a Republican state senator in Utah. "We've forgotten that we once believed that."

Henderson is just one of six women in the Utah State Senate this year. She's working with Better Days 2020 to try to resurrect Utah's history with women voting and running for office, in the hopes that more women will join her in the state legislature.

She's particularly interested in sharing the story of Martha Hughes Cannon, who won a state senate race in Salt Lake City in 1896. She was the first woman in America elected to a state senate.

Henderson is helping to get a statue of Martha Hughes Cannon installed in the U.S. Capitol this summer. She hopes that retelling Cannon's story will inspire more women to run, to pursue professional careers, and to lead the state. But she's meeting strong resistance.

"It is because of polygamy," Handerson said. Martha Hughes Cannon shared her husband with five other women. "It's a part of our past that we're embarrassed about. We don't like to talk about it. It's really uncomfortable."

Utah has been trying to run away from its history with polygamy ever since the Church of Jesus Christ of Latter-day Saints officially ended the practice in 1890. By the mid 20th century, the ghosts of polygamy had mostly receded into the past. But Utahans have found that full acceptance by mainstream American society has been tenuous.

"The most sure-fire way to jeopardize it is to amplify our polygamous background," Neylan McBaine said. But she also feels like excavating the stories of Utah's pioneers for voting rights might give everyone a new model for what being a Utah woman could mean today.

She's one of many women in Utah who hope that 150 years is far enough in the past that people can stop focusing on how Utah women once married, and start celebrating the ways that they led the charge for equal voting rights.

Dianna Douglas hosts the podcast Zion's Suffragists , about the history of women voting in Utah.

An earlier headline used the word "suffragette," a word that can have a negative connotation. It has been replaced with "suffragist." 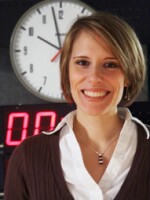 Dianna Douglas
Dianna Douglas has produced NPR's signature news pieces from across the nation and around the world. In the spring of 2010 she spent five weeks embedded with the US Army in Kandahar. Her work with the Special Forces in Meiwan Province, the Military Police in Kandahar City, and the recently-arrived 101st Airborne Division in Zhari document the small victories and overwhelming challenges of the American mission in Afghanistan.
See stories by Dianna Douglas
Latest News