As Scooters Proliferate, How Are Cities Managing The Chaos?

If they're in your city, you've certainly seen them, and you've probably formed an opinion about electric scooters – personal transportation devices that are ubiquitous in most urban Texas areas. (Though Houston has been more resistant.)

Many, mainly younger people, have flocked to the fleet of scooters from companies like Bird, Uber, Lyft and Lime. Scooter boosters say the vehicles – easily available, unlockable via apps and priced by the minute – are an inexpensive and eco-friendly way to get around a city's urban core.

Their detractors point to an uptick in visits to hospital emergency rooms by riders and innocent bystanders, plus the obstruction of sidewalks, which is an especially tough issue for people with disabilities, to say little of the clutter along college drags from Austin to downtown Dallas to beachside Corpus Christi.

In San Antonio, scooters are no longer allowed on city sidewalks. Paul Flahive, technology and entrepreneurship reporter for Texas Public Radio in San Antonio, says that even with sidewalks cleared of riders, scooter parking is a big issue.

"The biggest con for pedestrians is that it blocks pedestrian right-of-ways," Flahive says.

KUT Austin digital reporter Andrew Weber agrees. He says Austin has created parking areas for scooters, but they haven't been used as much as city leaders would like.

"There are 15,000 of these scooters in Austin, so it's the most visible complaint that they're parked sort of haphazardly, and that they're a hazard to folks who may be using a wheelchair," Weber says.

Gail Delaughter, transportation reporter for Houston Public Media, says scooter company Lime tried to convince the city to allow scooters in Houston by pointing to its own data showing that 40% of scooter rides replaced a car trip.

"In a car culture here in Houston, people are tempted to jump in the car for a trip of any amount," Delaughter says. "Maybe it's a hot day, it's very steamy outside, you've got to go one-third of a mile down the road … you're just going to jump in the car and do it because it's more convenient."

Weber says scooters first came to Austin in April 2018. Since then, some 4.5 million scooter rides have been taken in the city.

"The city didn't really have rules that were codified until May [of this year]," Weber says. "And those rules just went into effect this week."

Weber says reports of scooter injuries led the Centers for Disease Control and Prevention to study the scooter phenomenon in Austin. Of the 200 injuries reported in a three-month period, only one scooter rider was wearing a helmet.

"The city is not requiring folks to wear a helmet unless you're under the age of 18," Weber says. "You can't double up on a single scooter, and you can ride on a sidewalk in Austin, but it's kind of encouraged not to, if you can."

Delaughter says Houston is using scooter data from other cities to inform its rules.

In San Antonio, advocates of pedestrian travel are pro-scooter. They say scooters are comparable to bikes in terms of their impact on cities.

Weber says many in Austin say scooters are different from bikes because they don't have dedicated travel lanes, as bikes do in some parts of the city.

Delaughter says conflicts among drivers, cyclists, scooter users and pedestrians often devolve into disputes over "who owns the streets."

"That whole idea of sharing the streets safely, and not just as an avenue of travel for people in cars, but other road users as well," Delaughter says.

Flahive says San Antonio has taken a cautious approach to regulating the way users of all transportation modes share the road.

Delaughter says scooter rules in Houston are in an early stage. The city will begin engaging with stakeholders later this summer. She says Houston is focusing on where scooters are left when the ride is complete. 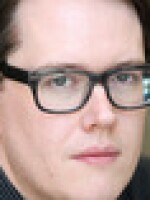 Wells Dunbar
As online editor for KUT News, Wells Dunbar covers news in Austin, Central Texas and beyond. Before joining the KUT family, Wells served as staff writer and news blog editor at The Austin Chronicle, and covered the Texas Legislature for Gallery Watch. Hailing from El Paso, Wells is a longtime Austin resident whose interests include technology and social media, film and music, and spending quality time with his wife and cat.
See stories by Wells Dunbar
Kristen Cabrera
Latest News
Related Content