On This week’s program, producer/host John L. Hanson Jr speaks with Margot Lee Shetterly, author of ‘Hidden Figures: The American Dream And The Untold Story of the Black Women Mathematicians Who Help Win the Space Race.’

Shetterly’s ‘Hidden Figures’ is an epic history about four African-American women— Dorothy Vaughan, Mary Jackson, Katherine Johnson and Christine Darden—who, from World War II through the Cold War, were vital in devising aeronautic calculations that propelled the United States as a leader in space exploration.

Teaching math at segregated schools in the South, the women were called into service during the labor shortages of World War II. Suddenly, these overlooked math whizzes had jobs worthy of their skills at the Langley Memorial Aeronautical Laboratory, in Hampton, Virginia, where Shetterly was raised.

Shetterly, whose father was among the early generation of black NASA engineers and scientists, had direct access to NASA executives and the women featured in the book. She grew up near the historically black Hampton College, where the women in  Hidden Figures studied, and had access to Langley Memorial/NASA employee newsletters dating back to 1942 to use as a resource for the book.

Even as Jim Crow laws segregated them from their white counterparts, the women of this all-black “West Computing” group helped America achieve a decisive victory over the Soviet Union in the Cold War. They were part of a group of hundreds of black and white women who, over the decades, contributed to some of NASA’s greatest successes. 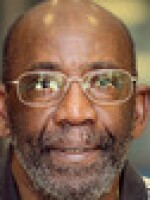 John L. Hanson Jr.
John L. Hanson is the producer and host of the nationally syndicated radio series In Black America. It’s heard on home station KUT Tuesdays at 9:30 p.m., as well as weekly on close to 20 stations across the country. The weekly podcast of IBA, the only nationally broadcast black-oriented public affairs radio program, is one of KUT’s most popular podcasts.
See stories by John L. Hanson Jr.
Latest News