Texas Public Radio caught up with Texan tenor Bille Bruley, who's playing the role of Steve Wozniak in this weekend's Austin Opera production of "The (R)evolution of Steve Jobs." (Wozniak gets all the great arias, but Jobs's name gets the title. Typical.)

Bruley's excited about the show, saying, "It really makes a great opera storyline about someone we all know and recognize." Referring to Austin Opera's enlightened practice of letting high school students and choir directors in for the dress rehearsal, Bruley says, "They loved it, and their most common response was: 'It's like if Hamilton were an opera, this is what it would be.'"

Transcript of the segment:

Barry Brake: We've got Bille with us today to talk about the big thing that's happening at Austin Opera. It's "The (R)evolution of Steve Jobs" by Mason Bates and Mark Campbell in performance this weekend. First performance was last night. They're performing also tomorrow, Saturday and Sunday. Billy, welcome to the show.

Bille Bruley: Thanks. Good to be here.

Barry: Oh, it's good to be back in Texas for a little bit, huh?

Bille: That's right. I haven't actually been back here since graduating from Baylor University back in 2014. I have not performed in the state of Texas since then. So it's it's a homecoming for sure.

Barry: So it's good to be back to the warm weather and sunny skies, huh?

Barry: Sorry about that, folks! OK, so tell me all about "The (R)evolution of Steve Jobs." You're playing the part of Steve Wozniak. I want to hear all about it.

Bille: This opera is just incredible. It's got electronics. It's got deejays in the pit. It's got all these instruments that you normally wouldn't find in the pit. Tibetan singing bowls! And you get the visual effects of like being in the movies a la "Steve Jobs." Mason composed this opera, with Mike Campbell writing the words, and the marriage of text and music is just so perfect in this opera.

It's only about a 90 minute opera, which is great. No intermission, straight through. It's vignettes of Steve's life. So his relationship with his business partner and co-founder Steve Wozniak, and also his relationship with Chrisann Brennan, who was someone he met during, let's say, his hippie phase. And they ended up having a little love affair, and Chrisann ended up getting pregnant. And Steve wanted nothing to do with the baby or Chrisann. So you really get a good sense of Steve's life from all different parts, and you kind of see the rise and the fall of this kind of this great American hero, you know? But you also get to see his evolution into the man that left us in 2011. You know, it really was a journey to get there.

So it obviously just makes a really great opera storyline about someone that we all know and recognize. There was actually a dress rehearsal on Tuesday night, our final dress rehearsal, and we do that for a group of high school students and their choir directors.

Bille: So they loved it. And a common quote among them where it's like, if "Hamilton" were an opera, this is what it would be.

Barry: Oh my goodness, that needs to go on the poster!

Barry: I've heard it's very listenable. Like, a lot of people who are wary of modern opera needn't be wary, it's very accessible and easy on the ears.

Bille: Oh, it's so tuneful. It's one of those that you will definitely leave the theater humming a tune, probably one of Woz's tunes that I get to sing! It's just just fun, fun music. And it also won the Grammy Award in 2019 for its live recording.

Barry: Well, we're so lucky in the state of Texas to have so much opera and so much new opera if you are brave enough to brave the weather, I believe that tickets are still available for Saturday night and for Sunday, it's AustinOpera.org. Bille Bruley playing the part of Steve Wozniak. Thank you so much for joining us.

Bille: Thanks. Good to be here. 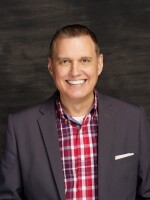