'Why Him And Not Me?' Songwriting To Mend The Wounds Of War | Texas Public Radio
KSTX - San Antonio
Related Program:
The American Homefront Project

'Why Him And Not Me?' Songwriting To Mend The Wounds Of War

For her new album, Nashville singer-songwriter Mary Gauthier collaborated with veterans to write songs about war, service, and life after the military.

Joshua Geartz joined the Army after high school. It was 1999, he had some uncles who served, and he thought, "college wasn't for me," Geartz said.

Fast-forward a few years to Geartz driving a truck on his last night of deployment in Iraq.

"My vehicle was hit with a roadside bomb which left me with a brain injury and some spinal cord damage," he said. "Now I typically rely on a wheelchair. I'm not wheelchair-bound. But it makes things difficult."

The change was fast and jarring, and Geartz isolated himself, trying to deal with the new challenges on his own. "Going from being a leader in the military to a point where it was hard to even care for yourself is really hard to deal with," he said.

It was those psychological wounds that nearly killed him. At one point, after returning home to his wife Lisa and two sons in New York, he attempted suicide. "I felt like I was a burden," he remembered. "It was almost like I wanted my family to be able to laugh again."

Lisa was looking for help when she came across a news article about a non-profit group that pairs professional songwriters with veterans.

"Knowing my love for music, she thought it would be something I would maybe go to," Geartz said. "Especially because she was able to attend with me."

Using music to find 'what the soul is trying to say'

Geartz had never written a song before, but he entered the SongwritingWith:Soldiers program and met Nashville singer-songwriter Mary Gauthier. She's been volunteering as a mentor for about five years, facilitating artistic collaboration between the military and civilian worlds.

"Soldiers are trained not to be vulnerable, but when they come home, they've got to learn it," Gauthier said during a recent tour stop at McCabe's Guitar Shop in Santa Monica, Cal. "Part of telling the story is being uncomfortably vulnerable. But that's what songs do."

The organization holds several retreats a year, and they're free to veterans and their partners. At the retreats, a handful of professional songwriters play a show so the veterans can get to know their work.

"They pick who they want to write with. Whose music resonates," Gauthier said. "We have to get each of them their own song. That's our commitment to them."

Each of the pro songwriters has been at the craft for decades, "and we can tell quickly what the soul is trying to say," she said.

Gauthier starts the writing process by asking her veteran collaborator to recount stories from the service as if he or she were describing a movie scene. She plays a melody on guitar that correlates with the emotion of the story.

"Music is so core to our experience that if the songwriter can find the melody that correlates with the trauma that the veteran is trapped in, it helps to move that story into language," she said.

Before getting involved in the program, Gauthier recalled being guilty of stereotyping members of the military. She chalked it up to the growing military-civilian divide. Since the end of the draft, fewer and fewer Americans know a member of the military.

"I had the stereotype of the conservative straight white guy who likes to shoot weapons. That's not who I'm meeting," she said. "And that's not even nice to think that. But I didn't know until I experienced it firsthand."

A soundtrack of the veteran experience

Gauthier's tenth album, Rifles and Rosary Beads, is entirely co-written with veterans and families from the program. 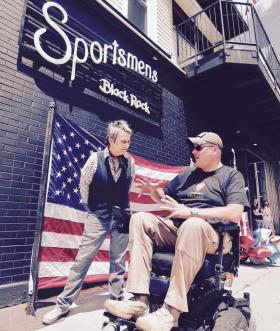 The eleven tracks dig deep into the veteran experience, including stories you may not typically associate with military service.

The song "Brothers" takes listeners to the emotional deployment of a new mom, with lyrics like, "War ripped my baby from my breast / Now my name and rank cover my chest / 23 hours I flew and wept / 23 hours I never slept."

And later, "I learned to cry without a sound / because I'm afraid you'd put me down."

Army veterans Meghan Couninghan and Britney Pfad helped craft the song. "Megan was nursing her baby and she got deployed. Basically - no special treatment. Hand the baby off and get to Iraq," Gauthier said.

Another track, "The War After the War," was co-written with half-a-dozen military wives and songwriter Beth Nielsen Chapman, who also wrote the monster hit "This Kiss" for Faith Hill.

"They have to serve in silence a lot of the time, and our veterans have told me over and over again, look, the hero here is my wife," Gauthier said.

Gauthier has a history of trauma and substance abuse in her own life, experiences she's delved into in previous albums. But she said the SongwritingWith:Soldiers process is not about trying to match the veterans' experiences with her own rocky past.

"Like, yeah, no, I wasn't in Fallujah. I don't have the experience of being in a war," she said.

On the first night at the Songwriting retreat, Josh Geartz arrived skeptical. But Gauthier's performance convinced him she would be a reliable songwriting partner.

"It was just something about her words, in the song," Geartz said. "Being able to express so many complex feelings with such a simple way of saying it." So they started talking - Gauthier looking for a way to unearth his song.

She asked, "What's the one thing weighing you down?" and Geartz replied, "I don't know, who the hell knows?'"

That became the first line of "Still on the Ride." Instead of his own life-changing injuries, Geartz chose to focus on lyrics that memorialized a fallen friend.

The song begins, "looking back now / who the hell knows / Where the soul of a dead soldier goes."

"I was just blown away that it could be that simple," he said. "Then when I started opening up and being truly honest with her, I think Mary saw where my true hurt, my true pain was coming from."

The song continues, "I shouldn't be here / You shouldn't be gone / But it's not up to me who dies and who carries on."

"Why him and not me? I think from that stemmed the idea that maybe he went first to be my guardian angel and make sure I made it through those things," Geartz said.

Geartz said he still works every day to maintain his mental health. He has joined Gauthier on stage to play harmonica during her Rifles and Rosary Beads tour.

Gauthier knows that the music on Rifles and Rosary Beads will make some members of the civilian audience uncomfortable.