Sexual trauma can be especially damaging for members of the military, where the perpetrator may be a commander and have access to weapons.

The Department of Defense estimates 14,900 service members experienced some kind of sexual assault in 2016, its most recent report. But because of the stigma, many wait decades before they get help.

So it's no surprise that the average age is 45 for women and 50 for men for veterans entering the Bay Pines VA Center for Sexual Trauma Services in St. Petersburg, Fla.

The delay seeking treatment is often due to the increased level of anxiety that accompanies sexual assault cases in the military, said Jessica Keith, a clinical psychologist and manager of the Bay Pines center.

"Often the perpetrators are someone in the command line, someone who has more power, and power not only to ruin someone's career," Keith said. "We also have to remember these are people with weapons who are trained to use them."

And there's added pressure on young recruits because reporting a sexual assault or continued sexual harassment of a fellow service member could be considered a betrayal. 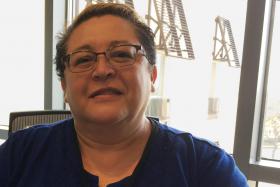 Survivor Jacque Thorington, 53, is an Army veteran who said she felt betrayed and ashamed when a military superior assaulted her decades ago. She covered up her symptoms using alcohol and prescription drugs.

When she finally went to the VA for help, the outpatient treatment wasn't frequent enough, and it required a five hour, roundtrip commute from her home in New Mexico.

"I needed specialized care. And I knew that things were really going wrong," said Thorington, who entered the Bay Pines residential program in January. "I was very depressed. I was suicidal. I couldn't function at work anymore. I really thought that my world was done, that I was going to kill myself."

In the intense Bay Pines program, she meets with a therapist twice a week for prolonged exposure therapy,  where she retells the story of her assault over and over until the strong fear associated with the memory decreases.

Seven days a week, she's in a group session with the other 15 women and men in the program. They often go on field trips to be exposed to "real life" situations like a crowded mall. That's helping Thorington, who said she hadn't left her bedroom for months prior to arriving at Bay Pines.

After just a few weeks, Thorington said she's noted a big difference and is looking forward to enjoying the rest of her life "and not be looking over my shoulder anymore."

The Bay Pines program is designed to reintegrate veterans back into their community, their work and their personal relationships.

When Army veteran Gail Bethel, 54, entered the program last winter, what she wanted most was a better relationship with her daughter.

Bethel said she became pregnant after being raped on base by an unknown assailant in the early 1980s. It took more than 30 years before she got treatment and graduated from Bay Pines earlier this year.

Her proudest moment came New Year's Eve when her daughter called her Mom for the first time during a phone call.

"She never called me Mom before," Bethel said. "She used to call me by my name, or lady. Now she calls me Mom." 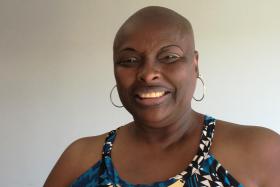 New Year's also marked another victory for Bethel, who Keith called a "role model" for the program.

"She took it upon herself to organize events for all the veterans here." Keith said. "She organized a New Year's Eve party for them all. She kept planning events. Part of her recovery is building that community and she actively sought that out."

Bay Pines treats about 100 veterans a year in the residential program and another 400 as outpatients for military sexual trauma.

"We have more males coming forward that are being assessed for military sexual trauma, which in the past it was a no-no in the military to share those experiences," Carreno said, adding that men make up about half of all the military sexual assault survivors.

Carreno said because the program is coed, veterans tend to be quicker re-entering society, which has both men and women.

Surveys of Bay Pines program graduates, according to Keith, show that 90 percent or more "have a clinically significant drop in their PTSD and depression symptoms."

Both Carreno and Keith attribute that success to letting veterans set their own goals.

"We ask them what do they want to see different in their life? For some veterans, it might be straightforward -- they want fewer nightmares, they want less PTSD symptoms," Keith said. "But others want something very different."

Bay Pines established the first VA coed, residential program for military sexual trauma in 2000, and it remains one of only a handful in the VA system.

Veterans who experience sexual assault or sexual harassment while on active-duty are eligible for free VA treatment, even if they lack documentation or did not report the assault while in the military.

A new replica of the Vietnam Memorial Wall made a pit stop in San Antonio Tuesday, before beginning its 2018 nationwide tour. USAA employees got a sneak peek of the mobile education center and exhibit before it headed off to Portland, Texas, for a public display on March 1.