An agency pilot program aims to bypass regulations that can make it hard for veterans to get cutting-edge medical treatment.

Listen
Listening...
/
Libby Denkmann reports on an pilot program to expand clinical trials at the VA.

When Army veteran Robert Galang had throat cancer last year, he went to the VA hospital in Long Beach, Cal. for care. The thing he remembers most is having to lie very still while doctors aimed beams of radiation right at his neck.

"That was new to me," Galang said. "You get strapped in, and you can't move, and you put your trust in the machines they have."

To keep his mind occupied through radiation and chemo, Galang brought along his favorite tunes.

"I grew up in the '60s, so I was listening to Led Zeppelin and all those types of music," he said. "I put myself in the hands of Stairway to Heaven"

As the VA successfully treated his cancer, Galang was part of a clinical trial to test a new, unproven drug. He received an I.V. drip designed to prevent painful mouth sores and infections, said May Thein, a Radiation Oncology Research Associate with the Long Beach VA.

"It's a condition that develops very commonly in patients going through chemotherapy and radiation, at the same time, for cancers of the oral cavity or oropharynx [where the back of the tongue, throat, and tonsils are]."

But vets like Galang who get their medical care at the VA can face barriers to accessing cutting-edge trials of cancer therapies and drugs.

There are several reasons. First, the VA treats an older patient population, often with overlapping medical conditions like heart, kidney or lung problems, along with mobility issues.

"At the moment, clinical trials for cancer are fairly restrictive," said Dr. Pankaj Gupta, Chief of Hematology and Oncology for the Long Beach VA. "To get the cleanest possible results, they try to restrict the patient population to one where organ systems are working well, the patients are functioning well, they have some life expectancy. That really narrows the eligibility, and excludes a lot of veterans." 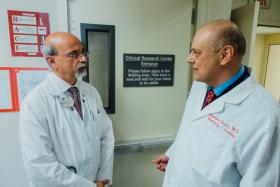 As a result, veterans with cancer may have fewer options for participating in clinical trials and less access to experimental new treatments.

In a statement, the VA said, "[w]hile VA has a robust research program - including clinical trials on cancer and other diseases - at more than 100 sites nationwide, VA facilities often face challenges initiating and completing trials."

For many clinical studies, VA patients are referred to institutions outside the VA, said Dr. Homayoun Sanati, a staff oncologist at the Long Beach VA.

"All this takes a lot of work both from the physicians' side and from the patients' side, because they have to go somewhere else, possibly far away," Sanati said.

The VA can't change its patient population, but it is trying to expand the number of clinical trials for cancer drugs and therapies offered through VA hospitals.

The agency is partnering with the National Cancer Institute on a new project called the NCI and VA Interagency Group to Accelerate Trials Enrollment, or NAVIGATE. It's a program that will roll out in 12 VA hospitals nationwide, including the Long Beach Healthcare System.

The goal is to cut through some layers of bureaucracy that can delay and restrict cancer trials at the VA, while bringing VA researchers into the process of building cancer treatment studies and identifying ways to connect more veteran patients to the newest innovations.

NAVIGATE will allow the VA to accept approval by the NCI's Institutional Review Board - the panel of experts who assure a trial is safe and scientifically sound - rather than running each new study through a local review process.

Sanati predicts this will greatly speed up the launch of cancer trials for VA patients.

"IRB approval has been the limiting factor for us to start any new clinical trials," Sanati said. "Typically when you want to start a clinical trial, it may take 3-4 months. But with this project we probably can do it in under a month."

The range of trials available at VA facilities should also multiply.

"Normally if a local IRB is required to approve each trial, it's very hard to approve more than ten or twenty trials at any VA facility," Gupta said. "With NAVIGATE, we can expand that considerably. And this will allow the VA in some ways to get a step ahead. Because not a lot of even big cancer institutions accept the NCI IRB."

A seat at the table

Through NAVIGATE, VA oncologists will also collaborate with the National Cancer Institute in the design and evaluation of clinical trials.

Gupta says that will give the doctors who regularly work with an all-veteran population a seat at the table to tailor new studies to their patients' needs.

"We can see how this trial may be more applicable to our patients, or how more of our patients might be eligible," he said.

If it works as planned, many more veterans will have the experience Robert Galang did.

He had the trial I.V. drug infused every weekday for seven weeks, and said it worked for him. His taste buds are working again, and he has full function of his throat back.

Galang is excited about the future of the therapy he played a part in developing.

"Through the grapevine, I heard that they're getting approved to be able to continue their clinical trial, which is awesome, as far as I'm concerned," he said.

VA doctors in Long Beach say they're hearing a lot of similar enthusiasm from veterans about clinical trials. Gupta says the same sense of duty that led them to serve their country in uniform translates to an eagerness to serve the greater good through medical research.

It's also uplifting for VA researchers. At the Long Beach hospital, Sanati says he's excited to explore clinical trials for the treatment of prostate and lung cancer, both prevalent in the veteran population. These could involve precision oncology - where the genetic material of cancer tumors is analyzed to target specific mutations - new drugs or immunotherapy agents, different ways of delivering radiation therapy, and further symptom management research.

"We and our patients will be greatly reassured that the treatments that they can be offered will be the same kinds of trials they would get if they were to go to one of the leading cancer hospitals in the country," Gupta said.

For Rural Veterans, Accessing VA Care Can Mean Hours In The Car

Approximately 5 million veterans live in rural America, and almost sixty percent of them rely on VA healthcare. But accessing that care can be a challenge.

Last year, the VA began offering mental health treatment to vets who don't normally qualify for V-A care. Since then, fewer than 200 people have used the program.

For veterans who need things like wheelchairs, walkers, and artificial limbs, getting them from the Department of Veterans Affairs can be a difficult, lengthy process. According to the agency’s own numbers, thousands have waited longer than 30 days for their requests to be fulfilled.