State Caseworkers Navigate The Risks Of Caring For Children And Adults

The agency is seeing once-high turnover rates drop, but one bill aimed at improving their safety wasn’t passed during the 2017 regular legislative session. That bill would have shielded their private information from the public – something that’s already done for other state employees like legislators, police officers, and prosecutors.

I’m sitting next to Brandi Labelle in a rental car, the air-conditioning blasting. It’s towards the end of September when we meet, but of course this is Texas, and the temperature outside is scorching hot.

Labelle is an in-home worker with Adult Protective Services, or APS, which covers a lot of Central Texas. She’s housed out of the Temple office in Bell County.

I’m tagging along with her for the day.

“Um, the first visit that we’re going out to is allegations of an elderly citizen being exploited by a family member,” Labelle says.

“We investigate allegations of abuse, neglect or exploitation, of people who are either over the age of 65 or those that have a disability that substantially impairs their ability to provide self-care,” she says.

But APS and CPS are different. One distinction: When Labelle works with APS clients, it’s voluntary. When families work with CPS, it’s not usually a choice. Either way, frontline workers from both programs are going into strangers’ houses every day.

“We’re walking up and knocking on someone’s door, identifying ourselves as being with a state agency and we have a badge on, but we don’t know what goes on behind those four doors,” she says.

Labelle says DFPS has a lot of protocols and precautions in place to keep workers safe. First, she says the issue of safety was integrated into all eight weeks of the training she had when she joined APS. 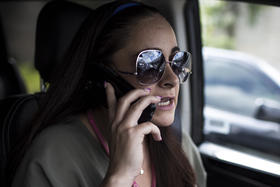 As an in-home worker, she also always receives a detailed report about each of the homes she’s scheduled to enter throughout the day. That report includes details such as whether there are weapons or aggressive animals in the home. Labelle also has a shared calendar with her supervisor so that someone knows where she is at all times.

Additionally, if she is ever concerned that a home-visit could be volatile, she can always bring a local law enforcement officer with her.

APS and CPS caseworkers also now have an app on their smartphones called “Safe Signal” that allows them to quickly, and covertly alert the police if they’re in danger.

On top of all of this, Labelle used to be in the military and explains that experience makes her even more sensitive to her surroundings. For example, she never has her back to a door and makes sure there is never furniture between herself and a doorway.

Even though there are already a lot of safety precautions in place at DFPS, State Rep. Gene Wu wanted to get another measure in place. He hoped that shielding the private information of frontline workers from the public would help with that, too.

When Wu, a Houston Democrat, introduced his bill, HB 39, earlier this year, he specifically had CPS investigators in mind.

“Caseworkers have had their plates checked on and then the parents who had their children removed will go harass them on Facebook, and go harass their families and cuss them out, and find them,” Wu says. “And many caseworkers commented to me that it’s just a matter of time before you see the headline ‘Case worker killed by angry parent.’”

While Labelle says she’s had an experience or two that made the hair on the back of her neck stand up, she’s never felt like she was in real danger. She adds that she doesn’t know any other caseworkers who have really feared for their safety either or had to use the Safe Signal app.

“But it can be scary,” she says. “You just have to be very aware of your surroundings. You have to pay attention in our state training we receive.”

Part of that training is knowing how to de-escalate tense situations.

“I don’t know if this is the correct term but I call it verbal judo,” she says. “You just need to know how to talk to people.”

I see this in action when Labelle is trying to figure out whether APS can work with Karen, who lives in Austin. We’re only using her first name because DFPS wants to protect her identity. Labelle sits down next to Karen on a staircase outside of her condo. Karen won’t let us inside because she says it needs to be cleaned up.

It’s the first time Labelle is meeting Karen and she has to cover a lot of sensitive issues – including whether or not Karen has access to a shower after her bathroom was damaged.

“No, I’d like to be able to take a bath better,” Karen says. “He doesn’t have the shower curtain up or anything.”

Labelle and Karen have good rapport, but it doesn’t always go that way.

“You can be the best case worker, and you can have great verbal judo, and sometimes it’s just gonna happen,” Labelle says.

In fact, DFPS told Texas Standard that there were 430 reported threats toward workers during Fiscal Year 2017. They added, “Managers estimate that for each threat reported, two or three go unreported.”

The agency also provided 23 anecdotes of worker threats and injuries that took place over the last three years, between 2014 and 2017. The people who shared each of these anecdotes are frontline workers for APS and CPS. DFPS only identified the people who shared these stories with a first initial – in this case “B” and “A” respectively. It’s not clear from the story if “B” is a male or female caseworker. “A”, however, is identified as a “her.”

Here is the story from Adult Protective Services worker “B.”

“In Wichita Falls, B was deadbolted in by adult client and forced by hand on back of neck to look in all rooms and closets and take pictures of imaginary things. Finally the client bared her private parts and demanded B take pictures. B finally got close enough to the door to unlock it and escape.”

Here is the story from Child Protective Services worker “A.”

“In San Antonio, after a dad threatened to find where she lives and make her life miserable, A received several successive visits to her home at night by men posing as salesman, but without the items appropriate to their claims. SAPD believes they were probably associates of this father sent to intimidate her and put a watch on her home.”

Still, there are a lot of ways to get caseworkers’ personal information.

Kristene Blackstone, the Associate Commissioner for Child Protective Services actually got her start with DFPS as a caseworker in Dallas.

“A lot of our caseworkers live in small towns, work in small communities, where everybody knows everybody and knows what they do,” Blackstone says.

Blackstone says safety is a big concern when it comes to caseworker retention.

“One of the top three things is work environment and work conditions and so obviously safety goes straight to the heart of that,” she says. “So I think it’s really important we provide people the training, the support, everything they need to feel safe to do the work that they do.”

To help with that, State Rep. Wu plans to reintroduce legislation in 2019 that would shield the private information of APS and CPS workers.

Uresti has served 20 years in the legislature. He recently sat down with Texas Public Radio’s Shelley Kofler to talk about why child welfare is once again his top priority.