'Outlaws And Armadillos' Celebrates The Independent Spirit Of '70s Country

When Willie Nelson's landmark album Phases and Stages was recorded in 1973, it was unlike anything being done in Nashville – a concept album, about a relationship coming apart. Metaphorically speaking, Nelson was separating from Nashville, too, a place where he'd long written songs for others. But where the Nashville machine kept him from doing what he loved to do, his return to Texas was a symbolic break with the conservative conventions of the country music industry.

It is now part of Texas lore that Nelson kickstarted an outlaw movement that would include Waylon Jennings, Jerry Jeff Walker, Guy Clark, Steve Earle, Billy Joe Shaver and countless others who brought country back to its rebellious roots.

The Country Music Hall Of Fame in Nashville opens a new exhibit Friday focusing on the story and influence of that movement. Co-curator Peter Cooper says "Outlaws & Armadillos: Country's Roaring '70s" celebrates more than just the music the 1970s outlaws made. It also includes the door of the Luckenbach General Store that Hondo Crouch converted from a post office into a bar and dance hall.

“Jerry Jeff Walker looked to Hondo Crouch as kind of a father figure and creative north star,” says Cooper, a country music journalist and senior lecturer at Vanderbilt University's Blair School of Music. “Jerry Jeff decided to make an album there in Luckenbach.”

The album, named for a bumper sticker on the general store's door, was Viva Terlingua.

“Maybe when people hear about an exhibit called 'Outlaws & Armadillos,' they’re gonna think that this is ... Waylon and Willie and the boys,” Cooper says. “It certainly has Waylon Jennings and Willie Nelson items, but it’s much deeper than that, and it includes people that were absolutely integral to the history of Texas music, and the development of songwriting.” 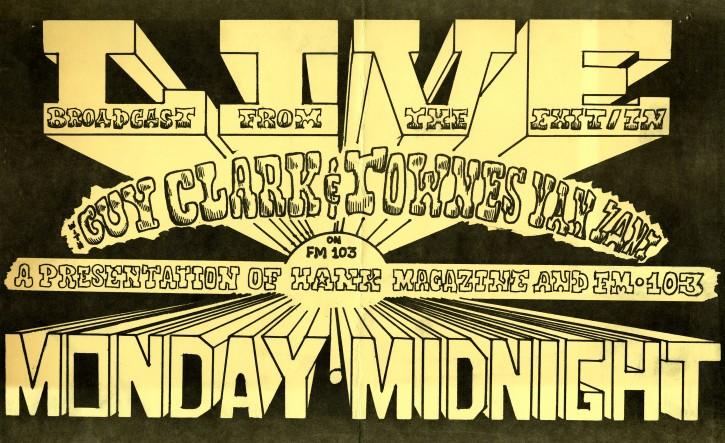 Cooper says the exhibit also makes clear that while many 1970s outlaws did rebel against Nashville strictures, there was a lot of outlaw spirit in Music City, too.

In the 1960s, “the Nashville sound” was a modernized means of creating and producing country music, but Cooper says that some of the industry was influenced by the free spirits of the 1970s. Chet Atkins, who was both a music producer and a talented guitarist, was the one who brought Waylon Jennings to Nashville.

“When Bobby Bare, another Nashville artist who was on RCA, heard Waylon play in Arizona, he called Chet Atkins and said, ‘You’ve got to hear this guy,’” Cooper says.

Cooper says that whether outlaw artists lived in Texas or Nashville, they shared a common desire to make the kind of music they liked, in the way they wanted to make it.

“The truth is that this entire movement, if we’re going to call it a movement, is about creative freedom," Cooper says, "and it’s about artists living a life of the mind."

Gary P. Nunn And The Funny Story Behind Going Home With The Armadillo Song

Fredericksburg’s Pioneer Museum continues with its Roots Music series. I got to visit with its next performer—a Texas Music legend. He’s Gary P. Nunn, and anyone who knows Texas Music knows he’s…

“Jack of all trades!” he laughed.

Although he claims to be a master of none, his track record shows otherwise. As to his musical roots, they’re surprising.