BMW, Microsoft, and CVS are among the companies that conduct on-base job training for service members who will soon leave the military.

Leaning under the hood of a cherry red BMW M4, Marine Corps Master Sgt. David Lopez rattles off some of his considerable knowledge about the guts of a sports car.

He points out the air intake, cooling reservoir, and electronic suspension sensors, all under the bright lights of a brand new auto workshop in the heart of Marine Corps Base Camp Pendleton, north of San Diego.

"I like to play with cars. I always fix everybody's cars in the neighborhood," he said.

After 23 years deploying all over the world and training recruits as a Marine drill instructor, Lopez is focused on the next chapter: his career after the military.

He's part of the inaugural class of the BMW Military Service Technician Education Program, or MSTEP, the first training program of its kind for a luxury automaker on a military installation. The car maker is partnering with Universal Technical Institute to offer the 16-week course free to active duty service members getting ready to transition out of the military.

Service members accustomed to tackling difficult missions face a daunting challenge as they wind down their time in the military. After years of following orders and fitting into the structured hierarchies of service branches, it's not always easy for separating troops to design a post-military career path.

Since 2011, the Pentagon has been beefing up transition training -making it mandatory, and including more real-world training to better prepare troops for the civilian job market.

The effort is getting a boost from the private sector. A growing number of companies are looking to fill increasing demand for skilled workers by opening training centers on military bases. The Department of Defense began inviting firms and labor unions to provide internship and apprenticeship opportunities to transitioning service members through its SkillBridge program in 2014.

Graduates of the Camp Pendleton BMW MSTEP will be certified level 3 BMW technicians familiar with technology and diagnostics specific to the brand.

For Lopez, that official recognition makes a difference.

"I basically know how to work on a car. But here I want to add the certifications," he said. "If you're certified, you know the stuff by the book, so you're the real deal. To me that's pretty big."

After completing the course, MSTEP students will be matched with job opportunities at authorized U.S. BMW dealerships. The company says there are plenty of opportunities waiting. 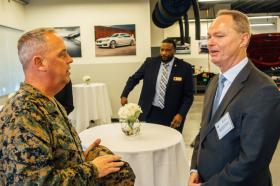 BMW is facing a shortage of skilled technicians to work on their cars, and that's a big part of what's driving this. It's looking to expand the pipeline for training workers.

"The dealers are demanding that," said Bernhard Kuhnt, CEO of BMW of North America. "Here, we've got people who are highly skilled. The men and women of the Marines are motivated, they are very disciplined, they work with high technology. So I believe this is truly a win-win situation."

To be selected for the program, students have to be in their final six months of service, pass a written exam, and interview.

Lopez remembered during his application process, one of the interviewers asked him, "Can you handle stress?"

He responded, "I can handle people shooting at me in combat. So I think I can handle a manager saying, 'hey, Lopez, you need to get 20 cars this week. Not a big deal."

Lopez is low-key about this transition, but there's a lot at stake for his family.

"Sometimes I feel like I'm in a panic attack. We've been in the Marine Corps all our lives." said Lopez's wife, Lizzie. "We work day by day. And see what happens."

The family is planning for everyday concerns they've never had to worry about living on military bases all over the world-things like housing, health insurance, and financial stability for their two sons.

Brigadier General Kevin Killea, commander of Camp Pendleton, said there is no easy time to make the jump to civilian life.

"Whether the Marine's been in the Corps for four years or fifteen years, when you make that decision to go out and to transition to the civilian sector, that's very daunting," he said. "I can't even put my head around what I would do next."

According to Killea, the Marine Corps transitioned 31,000 Marines to the civilian sector last year. Nearly 9,000 of those came from Camp Pendleton.

Each Marine getting ready to leave the military goes through the mandatory Transition Readiness Program, which includes making a financial plan and going to classes on topics like resume writing and interviewing.

Some get the chance to participate in programs like MSTEP to develop skills that are in-demand on the job market. Killea said there are currently nine such programs with internship-type models for skills development at Camp Pendleton, including job placement help at the end of the course.

BMW is not alone in looking to train and hire on bases.

In January, Microsoft opened its latest Software & Systems Academy at Marine Corps Base Quantico in Virginia.

The program started in 2013 to train transitioning troops to be cloud developers and database administrators. It now boasts an employment rate of over 90% and an average starting salary of around $70,000.

And last July, the drugstore giant CVS Health opened a ‘Talent Connect Center’ at Fort Bragg in North Carolina, where vets can train in management, retail and logistics.

"What I hope is that other organizations will take notice-your Amazons, your Apples, your Googles even," Killea said. "Because they want that known entity of a person who understands discipline and accountability and seeks responsibility."

Marine Corporal Leighton Anderson is steeped in that military culture, and he's accustomed to working 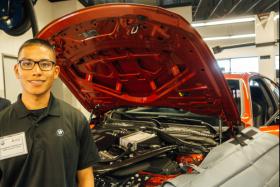 with advanced machinery. The 22-year-old from Gardena served as a Crew Chief on an MV-22 Osprey.

"It's an aircraft that goes from a helicopter to an airplane and back upon landing," he said. "We land in helicopter mode. We say it flies on pixie dust."

Ospreys have greater range and are much faster than helicopters. They can also be refueled mid-air. Anderson is responsible for maintenance and inspections on this multi-million dollar piece of equipment.

He's been a Marine for over four years. But for the past 13 months, he's been focused on recovery in the Wounded Warrior Battalion at Balboa Hospital in San Diego.

Anderson was in a December 2016 Osprey crash that left him severely injured. It happened off the coast of Okinawa, Japan, during mid-air refueling.

"It was a bumpy glide down to a crash landing on the beach," he said of the incident that left him with numerous injuries, including a traumatic brain injury, broken right shoulder blade, right hand, and left foot, broken ribs on his left side and a collapsed lung, plus a burst eardrum, and nerve damage to his right eye.

Now Anderson's recovery is giving way to a new challenge: transitioning back to civilian life.

He said the Marines have taught him a lot, but it's time for the next chapter.

"I'm going to miss the people," Anderson said. "But I have a lot of support, and my friends who have left the Marines say it's a nice change."

His commanders are giving him time to focus on his MSTEP training.

"Usually with the duties of a Marine, we're really busy all the time," Anderson said. "But with this program, leadership understands this is our number-one priority."

He believes it's a natural fit. The Osprey is "fly-by-wire"-meaning everything is electrical. And that's increasingly true with high-end sports cars like BMW.

"There's hundreds of sensors on those cars. And that's what I'm used to working with," he said. "Every system leads to another computer. It's definitely a good bridge to connect."

David Lopez knows he has a lot to learn, but the former drill instructor said he's ready to be a rookie again.

"You gotta earn your way through," he said. "I'm going in the civilian sector. I'm Bob the new guy, starting from the bottom."

A nonprofit that tries to connect the military community with available resources released its 2017 Support Programming Survey Thursday.

The Military Family Advisory Network surveyed 5,603 people with military ties, including active duty personnel, reservists, veterans and spouses, and found the financial strain of military life woven throughout the results.