The war in Vietnam helped the U.S. perfect a rescue platform for wounded soldiers that would fundamentally change civilian emergency response systems in the U.S.

It used UH-1 "Huey" helicopters as air ambulances, manned by two pilots, a medic, and a crew chief.

Flying into active landing zones to pick up wounded soldiers was a dangerous job. Just over a third of medical aviators became casualties in their work. Medevac helicopters were shot down at more than three times the rate of other helicopter missions during the war.

Dust Off crews, the teams that manned the helicopters, had the ability to provide basic medical care en route. They could administer IV fluids, apply bandages and tourniquets, and make sure that soldiers were still breathing. 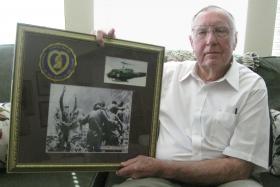 Such en route care was a change from previous wars, when helicopter fleets were mainly equipped to transport the wounded to medical facilities.

Jim Eberwine was a Dust Off pilot with the 82nd Medical Detachment back in 1966. Sometimes he and his crew would get so overwhelmed with casualties that they wouldn't even use the litters, or stretchers, onboard the helicopter.

"At one point in time I had 19 patients on board. It's designed for six. We could barely get off the ground. I thought, 'I might have a record here,'" Eberwine said.

In a long, narrow country where road networks were often dangerous, air evacuation was a lifesaver. The military had a network of combat medical centers, support hospitals, and even ships where patients could be flown.

The situation at home

Back in the U.S., emergency response systems weren't nearly as sophisticated.

"The expectation when you called an ambulance in the 1960s was a Cadillac Hearse would show up," said George Wunderlich, a historian at the Army Medical Department Museum who also has experience as an EMS first responder and firefighter.

"Two guys would get out, put you on a stretcher," he said. "They're not carrying anything else except for minor bandaging to keep the blood out of their ambulance. Then they rush you to the hospital."

This method was known as "scoop and go." It wasn't nearly sufficient to keep up with the carnage on the nation's highways at the time. In the 1960s traffic fatalities peaked at around 55,000 per year, far higher than today.

The Military Assistance to Safety and Traffic program, or MAST, was created in 1970 to mitigate the problem. MAST allowed military aviation units to help civilian communities with helicopter transport during emergencies.

The program relied on a rescue format similar to the one used during Vietnam.

"It was a helicopter manned by two pilots, a crew chief, and a medic in the back," said Lewis Barger of the Army Department Medical Museum. "It was the Vietnam evacuation platform located in the United States."

MAST offered the military a way of keeping its air crews trained while giving civilians a better chance of surviving serious accidents.

"Those are all going to transfer over and start a technological cascade that brings us to where we are today," Wunderlich said.

MAST is still active, though it downsized with the Persian Gulf War and the development of civilian air-ambulance services. Partly because of that, traffic fatalities last year numbered around 40,000, roughly a thirty percent decrease from the 1960s.

An athlete out of Joint Base San Antonio-Lackland will represent the United States in an international warrior competition later this month. The Invictus Games is an adaptive sports competition for wounded service members from around the world.

The Department of Veterans Affairs is taking steps to remedy the problem of suicide in the veteran community.