Outside at Cedar Valley College in Lancaster, Trisha Cunningham stands in front of a food bank on wheels. It’s filled with 3,000 pounds of fresh corn, cauliflower and potatoes. Volunteers are handing out the food to students.

“We know that students who are not nourished really are now having to find out where their next meal is coming from,” Cunningham says. “They have a hard time really focusing on their studies, and they don’t do as well in school.”

Cunningham’s the new CEO of the North Texas Food Bank. Her mobile pantry is making its first visit to a Dallas County college, and it will return to this campus. Joe Seabrooks, the president of Cedar Valley College, says it makes all the difference.

“It’s the difference between students dropping out. It’s the difference between people choosing to still work underpaid jobs to make ends meet. And so this right here, I think, gives people an opportunity and some hope to keep pressing to know that there’s a whole community that cares about you to make sure you have all of the foundational needs you need to be successful as a student.”

Hunger’s on the rise

Recent research backs what Seabrooks is saying - that college kids without regular access to nutritious meals suffer in school.

“We do see that the grade point averages – the performance in courses — among these students is lower than it is with other students, and their drop-out rates are higher,” Sara Goldrick-Rab, an education professor at Temple University in Philadelphia, says.

Over the past few years, she’s researched food and housing insecurity at colleges for the University of Wisconsin’s HOPE Lab.

Goldrick-Rab says that food insecurity means “very sizable numbers of students that don’t have sufficient nutritious food to eat that they can get in a socially acceptable manner, which can mean that somebody never gets fruit and vegetables and regularly skips meals, and may go for days, frankly, without eating.” 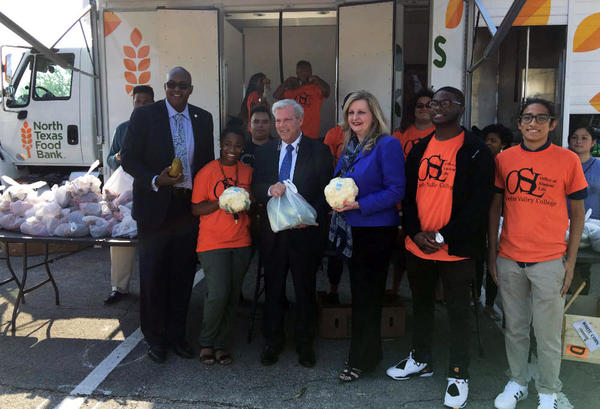 Her research shows even greater hunger at community colleges, where tuition’s more affordable especially for students from lower-income families. Between half to two thirds of community college students nationally are food insecure. Her study included the Dallas County Community College system.

It turns out, Goldrick-Rab says, Texas numbers are slightly better than the national average.

“Maybe one reason is that Houston and Dallas and other areas throughout Texas do have some of the better food banks and food assistance programs in the country,” she says.

Help from the food bank

Kenneth Rodriguez, a 19-year-old Cedar Valley computer science student, has benefited. Years ago he and his family members were able to eat thanks to the North Texas Food Bank.

“We didn’t really have anything in our fridge,” Rodriguez recalls. “When we got our food, it brought a smile to me, and I know it helped my mom feel more comfortable because now we would have food and we would eat with smiles on our face.”

Rodriguez hands out fresh produce to fellow students at Cedar Valley from the mobile food pantry.

“I feel like I have to give back because the North Texas Food Bank gave to me and my family and helped us during our times of need,” Rodriguez says.

Christian Jones, in his second year at Cedar Valley, is getting food from the mobile pantry because there’s an immediate need at home.

“I’ve got my dad, my brothers, and we can eat a little healthier at my house because all we eat is canned food and processed foods and fast food anyway,” he says. “So that might be good.”

“It just really helps out,” Esquivel says. “It makes pretty much a big difference with just saving money, and also, every food that they give is nutritious and that also helps.”

More and more colleges are becoming aware of their students’ food needs, not just in North Texas, but across the country.

“I received a call from a faculty member here on campus who had a student in class that was so hungry they couldn’t pay attention to the lecture,” says Kathleen Moroney.

That was four years ago when Moroney was relatively new to her administrative job in the Vice President’s office at Chico State University in California.

“This student was a “straight-A” student, had three jobs; all of them were unpaid internships. And the faculty member’s asking me where the pantry was on campus,” Moroney says. “So I started asking around and realized there was not a food pantry. And so I decided that we could start one.” 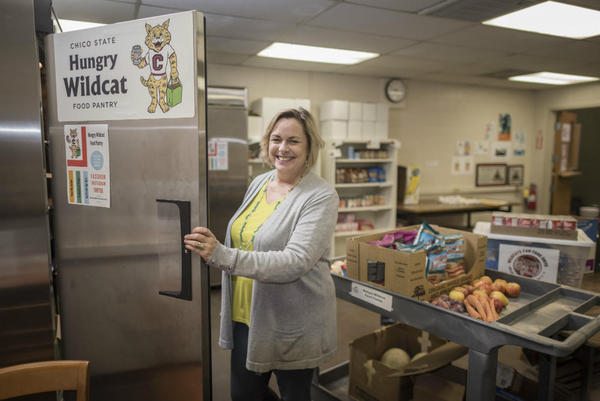 And so she did. Chico State’s Wildcat Food Pantry has grown, serving a few hundred students the first year and more than 3,000 last year.

Across Texas, several colleges are setting up or have already created food pantries.

In Dallas-Fort Worth, the North Texas Food Bank’s mobile pantry has visited Texas Woman’s University in Denton and plans to visit other Dallas County community colleges.

Goldrik-Rab says college food insecurity is a national problem, calling for a national response. She says one possible solution could be an extended Supplemental Nutrition Assistance Program, or SNAP, also known as food stamps.

“So if you don’t have children,” Goldrick-Rab says, “you’ve got to work 20 hours a week in most places to get SNAP. But college doesn’t count. That needs to be changed so that people can get SNAP.”

Goldrick-Rab offers yet another idea.

“We have a really important program in the National School Lunch Program that gives school children breakfast and lunch every day and even sometimes sends backpacks home on the weekends for food,” Goldrick-Rab says.

However, that help stops when a student graduates high school. But hunger doesn’t end in the 12th grade. She says the free lunch program should follow students to college so they can focus on school and not on food.