The number of veterans in the VA healthcare system who are 70 or older is expected to grow 30 percent in the next eight years.

Listen
Listening...
/
Libby Denkmann reports on the VA's efforts to cope with an aging veteran population.

On a recent morning in Camarillo, Cal., dozens of veterans, their spouses, and grown children settled into their seats at the Ventura County Office of Education, free coffees and sodas in hand, to hear lawmakers discuss what's waiting for their families as they enter old age.

The official topic of the congressional field hearing was, "The State of the VA's Long-Term Care Services." But it could have been called: "Preparing for The Gray Tsunami." That's one nickname for the growing number of aging veterans who will soon need a range of support - in some cases, 24/7 medical attention or memory care. Others may only need some help with day-to-day tasks like bathing, dressing, and getting around. 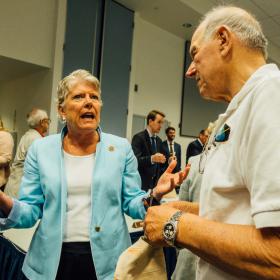 "It's abundantly clear that the VA is not prepared for this bubble," said Congresswoman Julia Brownley (D-CA), who represents Camarillo and is ranking member of the Veterans Affairs Subcommittee on Health. "We've got to get very serious about making sure that we are prepared."

Over the next eight years, the number of veterans in the VA healthcare system who are 70 years or older is expected to increase by 30 percent. The population the VA is required to cover for nursing home care - veterans who have a service-connected disability rating higher than 70 percent - is expected to double by 2024, hitting one million patients.

The VA simply can't afford to care for all these veterans in traditional nursing home settings, said Teresa Boyd, the Assistant Deputy Under Secretary for Health for Clinical Operations at the agency.

"With the trajectory the way that it is now, we are going to be in a crisis with regards to long-term institutionalized care," Boyd said.

To handle the incoming wave of aging patients, the agency is looking at how to support more veterans getting in-home and community-based care that will keep them healthier longer, and out of nursing homes.

It's a huge costs saver, but that's not the only driver. The VA says the shift also is about listening to patients. "Being able to keep our veteran in his or her home, as long as it's safe, that's their preference for the most part," Boyd said.

There is also data indicating the preventative work of home and community-based care makes for better health outcomes for veterans, significantly lowering hospital admissions and days spent in the hospital.

But even in the calm before the Gray Tsunami, it's not easy to get the VA to foot the bill for nursing home care.

Veterans who qualify for residential care and get to a point where they're unable to live independently may move into a VA Community Living Center (formerly called a Nursing Home Care Unit) or one of the beds the VA contracts for and inspects in private facilities as part of the Community Nursing Home program.

But most veterans do not clear the 70 percent disability rating bar. In Ventura County, home to over 40,000 veterans, only about 4 percent meet that criteria, according to Mike McManus, Veterans Service Officer with Ventura County's Human Services Agency.

"Many vets assume they're eligible once enrolled in VA health care, but that's not the case," McManus said during testimony at the congressional hearing.

The VA also covers about one-third of the cost of care in state veterans homes, though eligibility requirements for those facilities vary state-to-state.

69-year old Navy veteran Charles Boyd Hanlon showed up to the hearing in Camarillo to learn more about options for vets in his community. If the time comes that he needs extra help with everyday tasks, Hanlon wants to stay out of a nursing home as long as possible.

"I really don't like hospitals that much," he said.

But Hanlon remembered when he and his siblings cared for their mother in her later years, while she struggled with memory problems.

"It was very emotional, and I can see where a caregiver would get burned out. Because you're totally responsible for somebody," he said. "It's the aging process, the dementia and everything, I can see where it would wear people down."

Congress recently attempted to address this issue with a new law. The VA MISSION Act, signed by President Trump in June, includes stipends and training for caregivers of pre-9/11 veterans, who were previously excluded from benefits.

For veterans older than 65 and their spouses who need help with daily living and qualify for a VA pension, the agency will pay an "Aid and Attendance" allowance. In 2017 a single veteran with no dependents had to earn under $13,166 to get a VA pension or be totally disabled and meet other requirements like service during wartime.

The VA is also looking at expanding services like Homemaker and Home Health Aid, which sends professionals to do things like help veterans bathe, fix meals, and take their medications, to help make staying at home a viable option for more seniors. Some veterans also have the option of receiving care in medical foster homes, where they get nursing-home level care from trained caregivers in a private home setting.

"Many of these new innovative types of non-institutional care require the veteran to pay, as the VA lacks the ability and resources to do so," Brownley said.

Just a few miles away from the Camarillo hearing, the Oxnard Family Circle Adult Day Health Care Center offers a VA-covered respite for caregivers and a social outlet for veterans getting longterm care at home.

In a large room, mostly filled with folks in their 80s and 90s, a Zumba class danced to a catchy Reggaeton beat. Some of the participants were fully engaged in the aerobics, while others sat or leaned against walkers, clapping to the rhythm instead.

Along with its general clientele, Oxnard Family Circle serves more than 100 veterans who come for about five hours a day of activities, physical therapy, and professional nursing care. The facility provides breakfast, lunch, and door-to-door transportation.

"We work with their doctors, we work with their caseworkers, so that we can provide full care all the way around for the whole person," said Sandra Hamilton, Oxnard Family Circle's community outreach officer.

The VA covers the cost of adult day health care once a doctor decides it's clinically necessary.

"It picks me up and energizes me more than being home all day long," said 84-year-old former Army veteran Frank Acosta. "And when I go home, my mind is more open to things, I can think better."

Hattie Freeny, a Korean War-era Marine Corps vet, says she's been coming her for 8 years. "And I love it," she said.

Freeny suffers from severe PTSD, and her son searched high and low for a facility that would work for her.

"There are not too many places for us to go that we can feel comfortable enough to participate in things," she said. "I'm a rare Marine who had a problem in the Corps. And I'm trying to live through it. This place helps me to live through it."

The VA was a pioneer in developing home-based long-term care in the early 1970s. Now it's playing catch-up in the shift away from nursing homes. The agency lags far behind Medicaid, the largest federal spender on long-term care. 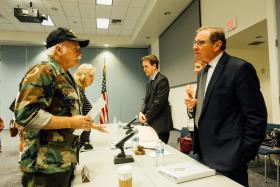 More than 50 percent of Medicaid long-term care dollars go to home and community-based services. compared with about 30 percent at the VA.

Meanwhile, recent investigations by USA Today and the Boston Globe found the quality of care is often worse at VA nursing homes compared to private facilities.

According to data the agency released in June, nearly half of the VA's 133 nursing homes nationwide received the lowest possible quality rating: one star out of five.

The agency blames the discrepancy on poor internal record keeping and a more challenging population of patients.

"Our case mix in our Community Living Centers is quite different than in the private sector, where they have a selection process," Boyd said. The VA serves more spinal cord injury patients, for example, and veterans in nursing home care are more likely to suffer from severe mental health conditions than patients in private facilities.

According to Boyd, the VA is taking steps to turn things around at its nursing homes.

"We're looking at our documentation, we're educating folks about that. We're pairing up best practices sites with our low-performing sites," Boyd said. "And we're also engaging in the CMS (Center for Medicare & Medicaid Services) improvement program."

The VA in Florida has begun offering telehealth programs in dance, visual art, and music. The programs link therapists with veterans in their homes.

In L.A., Homeless Vets Now Can Sleep In Their Cars At The VA

In the first program of its kind in the nation, the West Los Angeles VA has opened its campus to veterans who sleep in their cars. Officials say it's a less-than-ideal starting point to help homeless vets.

VA Issues Long Awaited Veteran ID Card, But It Comes With An Ad On The Back

Congress mandated the card in 2015, but provided no funding. So the VA struck a deal with Office Depot.

Just because you are getting older doesn't mean you have to deal with problems related to old age.

Some of the world's leading research on how to fight the consequences of aging is happening here in San Antonio at UT Health's Barshop Institute for Longevity and Aging Studies.

What have researchers and scientists discovered about treating the underlying causes of aging, in order to enhance the quality of later life?