What they're saying in Russia about Ukraine's advances

We're going to begin this hour with what appears to have been a major victory for Ukraine over the weekend. Amid a Ukrainian counteroffensive, Russian forces withdrew from several key cities in Ukraine's northeast. Given how hard Russian leaders have worked to control the narrative about the war, especially at home, we thought it important to hear just what is being said about this in Russia. So we're joined now by NPR's Charles Maynes in Moscow. Charles, welcome. Thank you so much for joining us.

CHARLES MAYNES, BYLINE: Happy to do it.

MARTIN: So how is Russia presenting these latest developments?

MAYNES: Well, Russia's defense ministry confirmed its forces did indeed retreat from several cities, including Izium and Kupiansk, both of which are important logistic centers for the Russian military campaign in east Ukraine. But the ministry framed it differently than a withdrawal. Here's spokesman Igor Konashenkov.

MAYNES: So here, Konashenkov explains this was part of a plan to regroup forces in territory held by Moscow-backed separatists, all part of Russia's stated goal of liberating these territories in east Ukraine - in the Donbas - from Kyiv's control. Now, today, the Kremlin released a statement that President Vladimir Putin had held talks with French President Emmanuel Macron on the ongoing crisis at the Zaporizhzhia nuclear power plant but made no mention of the changes on the front lines. You know, frankly, it's hard to imagine the Russian leadership acknowledging any setbacks. They've repeatedly said everything is going according to plan. That's been the mantra all along.

MARTIN: And this is obviously very different than what is being presented in the West. You know, obviously, I'm curious about what the Russian public makes of this. Do we even know?

MAYNES: Well, it's tricky. You know, new laws passed in the wake of the conflict criminalize criticism of the official line. What's curious here is you see those who are essentially Kremlin loyalists doing so anyway. We've heard from a chorus of nationalist voices saying this is a disaster in leadership and military planning. Even Ramzan Kadyrov, the strongman leader of the Republic of Chechnya, who's been a relentless cheerleader for the Russian campaign, this morning took to social media to say that if things didn't change soon, he would be forced to raise the issue with Putin directly. Now, for whatever reason, these, again, largely pro-Kremlin voices have been allowed to criticize the leadership while anti-war critics have been jailed and persecuted, including, of course, key members of the Russian Democratic opposition.

MARTIN: Well, speaking of the Democratic opposition and democracy, my understanding is that there are elections going on across the country this weekend. Is Ukraine an issue in those elections in any way?

MAYNES: Yeah. You know, we're on Day 3 of voting for regional elections that determine a handful of governorships - city councils, municipalities, including in Moscow. Not - so not, you know, unimportant, but given that Russia is fighting Europe's biggest conflict since World War II, it's somewhat remarkable that there's no real discussion of Ukraine, and that's by design. Again, there are these new laws that criminalize criticism of the military campaign. Meanwhile, opposition leaders like Alexei Navalny and several other high-profile would-be candidates are in jail, and several less-well-known opposition figures are also - been pruned from the ballot.

So, you know, not much looks likely to change, although we won't know the formal results until mid-week, with one exception - the Donbas and the territories Russia controls in southern Ukraine. You know, there was talk in Moscow about possibly timing these elections alongside referendums in these territories to vote to formally join the Russian Federation. The Kremlin abandoned that idea even before these latest Ukrainian advances simply because you can't annex what you don't control, at least not yet.

MARTIN: NPR's Charles Maynes in Moscow. Charles, thank you so much. 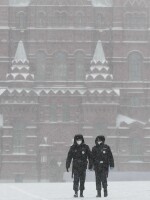