The universe's splendor and breadth are on display like never before, thanks to a new batch of images that NASA released from the James Webb Space Telescope on Tuesday.

The images from the new telescope are "really gorgeous," said NASA's Jane Rigby, the operations project scientist for the James Webb Space Telescope.

"That's something that has been true for every image we've gotten with Webb," she added. "We can't take blank sky [images]. Everywhere we look, there's galaxies everywhere."

The images reflect five areas of space that researchers agreed to target: the exoplanet WASP-96 b; the Southern Ring Nebula; the Carina Nebula; Stephan's Quintet (five galaxies in the constellation Pegasus); and the galaxy cluster SMACS 0723.

A nursery for the stars

One of the most eye-popping images released on Tuesday depicts what looks to be cosmic cliffs, valleys and mountains — albeit with mountains that stretch to seven light-years in height.

The image captures part of a "stellar nursery called NGC 3324 at the northwest corner of the Carina Nebula," NASA said. It's roughly 7,600 light-years from Earth.

"The blistering, ultraviolet radiation from the young stars is sculpting the nebula's wall by slowly eroding it away," the agency added. "Dramatic pillars tower above the glowing wall of gas, resisting this radiation. The 'steam' that appears to rise from the celestial 'mountains' is actually hot, ionized gas and hot dust streaming away from the nebula due to the relentless radiation."

Galaxies from 'It's a Wonderful Life' stun scientists

The tight galaxy group called Stephan's Quintet is a "laboratory" for scientists to study the powerful effects galaxies can exert on each other, thanks to new data from the Webb telescope.

Researchers hope to learn more about how galaxies merge and interact, including triggering each other to form new stars, and how those processes might be impacted by supermassive black holes. The image casts the quintet in a new light, after they represented angels in Frank Capra's class film It's a Wonderful Life.

"This enormous mosaic is Webb's largest image to date, covering about one-fifth of the Moon's diameter," NASA said. "It contains over 150 million pixels and is constructed from almost 1,000 separate image files."

Webb pulled the veil back on the second star in the Southern Ring Nebula, using mid-infrared wavelengths to capture it in extraordinary detail.

"The star closely orbits its companion as it periodically ejects layers of gas and dust," NASA said. "Together, the swirling duo have created a fantastic landscape of asymmetrical shells."

The new image shows the nebula from a nearly head-on view. But if we could see it from its edge, NASA says, "its three-dimensional shape would more clearly look like two bowls placed together at the bottom, opening away from one another with a large hole at the center."

Webb delivers a portrait of a puffy giant

"WASP-96 b is a giant planet outside our solar system, composed mainly of gas," NASA said. "The planet, located nearly 1,150 light-years from Earth, orbits its star every 3.4 days. It has about half the mass of Jupiter, and its discovery was announced in 2014."

The agency didn't release a photo but rather a spectrum analysis of WASP-96 b's atmosphere, garnered from Webb sighting the WASP-96 b as it transited in front of a star.

The analysis found the "chemical fingerprint" of water in the atmosphere, said Knicole Colon, a research astrophysicist at NASA's Goddard Space Flight Center in Greenbelt, Md.

A look at some of the universe's first galaxies ever

The trove of images comes one day after a jaw-dropping first image was published by NASA and the White House, more than six months after the telescope was launched from Earth.

"If you held a grain of sand on the tip of your finger at arm's length, that is the part of the universe you are seeing — just one little speck of the universe," NASA Administrator Bill Nelson said on Monday.

But that speck contains multitudes. And thanks to the telescope's deep and sharp infrared images, Earthlings are getting a more detailed look at distant galaxies than was ever possible.

That first image comprises thousands of galaxies, with even faint and diffuse structures visible for the first time.

The stunning displays amount to a rich lesson in the history of the universe: some of the galaxies are more than 13 billion years old, meaning they formed relatively soon after the Big Bang.

For instance, the image of galaxy cluster SMACS 0723 amounts to a snapshot from 4.6 billion years ago.

Aside from gaping at stunning views like everyone else, researchers will use data from the Webb telescope "to learn more about the galaxies' masses, ages, histories, and compositions," according to NASA.

The Webb Space Telescope is the culmination of an international program led by NASA. Its partners include the European Space Agency, or ESA, and the Canadian Space Agency. 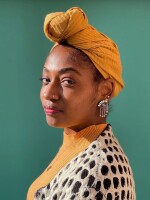 Vanessa Leroy
Vanessa Leroy is a photo editing intern at NPR and a freelance photographer and photo editor, based in Boston, Massachusetts. She holds a BFA in Photography from Massachusetts College of Art and Design. She remains on the hunt for new ways of seeing, remembering and altering the world through photography. She is drawn to image-making because of the power it holds to create nuanced representation for marginalized people and uplift their stories. She sees photography as a tool for social justice, and with it, she hopes to create worlds that people feel as though they can enter and draw from, as well as provide a look into an experience that they may not personally recognize.
Bill Chappell
Bill Chappell is a writer and editor on the News Desk in the heart of NPR's newsroom in Washington, D.C.
See stories by Bill Chappell
Latest News