How can police departments be made more transparent? Some states have made moves recently. In New York, Governor Andrew Cuomo repealed a law that had stood since the 1970s. It kept police misconduct records private. But it could be a while before anyone sees those New York files because California passed a similar law near the end of 2018, but many of their records are still hidden, tied up in court challenges. Sukey Lewis with member station KQED in San Francisco is part of a team that's been reporting on the California records.

SUKEY LEWIS, BYLINE: Hi. Thanks for having me on.

KING: These are internal police records that we're talking about. What kinds of things are in those records?

LEWIS: So these records include everything from an officer's training history to complaints about that officer, to, actually, reports about very serious incidents in which an officer was involved and maybe used force, perhaps even killed somebody. They also include internal affairs files. In New York now, all of these files from complaints to investigative findings can be asked for. And it's worth noting that the law that passed here in California, which is called the Right to Know Act, is much narrower than New York's repeal. We still don't get to see complaints. We don't even get access to all misconduct records. It only applies to certain types of disciplinary files. You know, one thing that was left out of the law is instances where an officer was disciplined for racial bias, for example. The other thing it opened up here was all use-of-force cases where someone got really badly injured or killed.

KING: So California's Right to Know Act went into effect in January of 2019. You've been collecting records since then. What have you found?

LEWIS: So yeah, we actually joined forces with about 40 other newsrooms across the state to try to get these records from every law enforcement agency. You know, what's really been interesting is seeing, you know, the body cam footage and these internal affairs interviews, which give us a much more comprehensive understanding of how these internal investigations are done. But what we're still missing is hundreds more records, you know, especially from the larger departments.

Right out the gate, we faced big legal challenges from the police unions, which also had tried to block the passage of the law. And some departments, like Inglewood and Fremont, destroyed years' worth of older documents right before the law went into effect. But actually, this Monday, a state senator here introduced a bill to try and fix some of these loopholes and make sure that agencies, you know, had some incentive to comply with the new law.

KING: If you look at New York state and this reform law that they've passed, do you expect there will be similar delays there?

LEWIS: Are a lot of people that I've talked to, First Amendment advocates and journalists, do expect that. You know, the law is a lot cleaner than California's. There's less parsing of, you know, what can still be kept private and what can be disclosed. So I think we will get a fuller picture of how departments are doing it. And I think one thing that has given people hope is that city officials in New York have also pledged to really work to affirmatively provide this information online, you know, build databases that the public can access. And that would really be huge.

KING: Do these moves actually lead to transparency and accountability based on everything that you've researched and looked into there in California?

LEWIS: So these laws, they give the public a look inside these internal processes, you know, to understand where there's the potential for corruption and abuse, but they don't fix any of it. You know, transparency is really just the first step.

KING: Sukey Lewis, criminal justice reporter at KQED. Sukey, thank you so much for joining us. 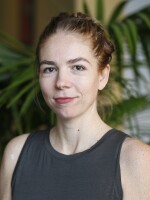 Sukey Lewis
Sukey Lewis is a criminal justice reporter and host of On Our Watch, a new podcast from NPR and KQED about the shadow world of police discipline. In 2018, she co-founded the California Reporting Project, a coalition of newsrooms across the state focused on obtaining previously sealed internal affairs records from law enforcement. In addition to her reporting on police accountability, Lewis has investigated the bail bonds industry, California's wildfires and the high cost of prison phone calls. Lewis earned a master's degree in journalism from the University of California at Berkeley.
Latest News