Han Ong: Writing of the Philippines from a Distance

Han Ong is a playwright, a MacArthur "genius grant" winner, and the author of a new novel: The Disinherited. The book is set in his homeland, the Philippines -- a place Ong has not revisited since he arrived in the United States 20 years ago at age 16.

The author tells NPR's Liane Hansen that part of his research for the story of a middle-aged writing professor returning to the Philippines for the funeral of his father came through reminiscences.

"I knew that my memories of the Philippines were antiquated and I needed the current Philippines to be alive in my head," he says. "And to that purpose I sort of get together with a lot of Filipino friends and we keep alive the Philippines."

In 1997, Ong -- a high-school dropout -- was one of the youngest recipients of a MacArthur grant, an award that provides artists, scientists, activists and entrepreneurs financial backing to pursue work in their field. Ong used the money to try his hand at writing novels, but the very idea of a financial windfall -- and what to do with it -- propels the plot of The Disinherited.

His protaganist receives $500,000 from the estate of his father, a corrupt businessman. His first inclination is to refuse the cash, but then he accepts it, intending to give it away. But the character discovers, as Ong says, how difficult it is to "give away money well."

The book also allows him to explore personal angst stemming from the conflict of his chosen career and his Asian heritage. But he's interested in more universal issues.

"If I can pin some common element down, a vein that runs through my work, it would be a sense of outsiderness... the point of view of somebody with their nose against the glass looking in," he says. 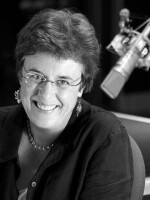 Liane Hansen
Liane Hansen has been the host of NPR's award-winning Weekend Edition Sunday for 20 years. She brings to her position an extensive background in broadcast journalism, including work as a radio producer, reporter, and on-air host at both the local and national level. The program has covered such breaking news stories as the wars in Iraq and Afghanistan, the capture of Saddam Hussein, the deaths of Princess Diana and John F. Kennedy, Jr., and the Columbia shuttle tragedy. In 2004, Liane was granted an exclusive interview with former weapons inspector David Kay prior to his report on the search for weapons of mass destruction in Iraq. The show also won the James Beard award for best radio program on food for a report on SPAM.
Latest News