Cowboy poets, writers, musicians and their fans descended on the small town of Elko, Nev., for the 20th National Cowboy Poetry Gathering. Who better to report on the sights and sounds of it all than Morning Edition's own resident cowboy poet and commentator Baxter Black.

The performers include Wally McRae, a third-generation Montana rancher who says he enjoys "getting on stage and having that nervous adrenaline and having the rush to get up there." But McRae says he has the advantage -- he knows what's coming and the audience doesn't.

Among the musical performers is Wylie Gustafson, the voice behind that Yahoo! commercial. He hails from from Dusty, Wash. (population 12) and describes himself as a "horseman/cowboy/yodeler/ entertainer/guy that jumps around a lot."

"All we really want is for someone to listen," says Black, himself a performer at the event. 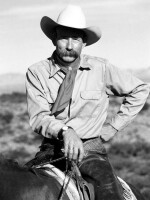 Baxter Black
Baxter Black can shoe a horse, string a barbed wire fence and bang out a Bob Wills classic on his flat top guitar. A cowboy poet and former large animal veterinarian, Baxter was raised in New Mexico and spent most of his workin' life in the mountain west tormenting cows. Black now lives in Arizona and travels the country tormenting cowboys.
Latest News